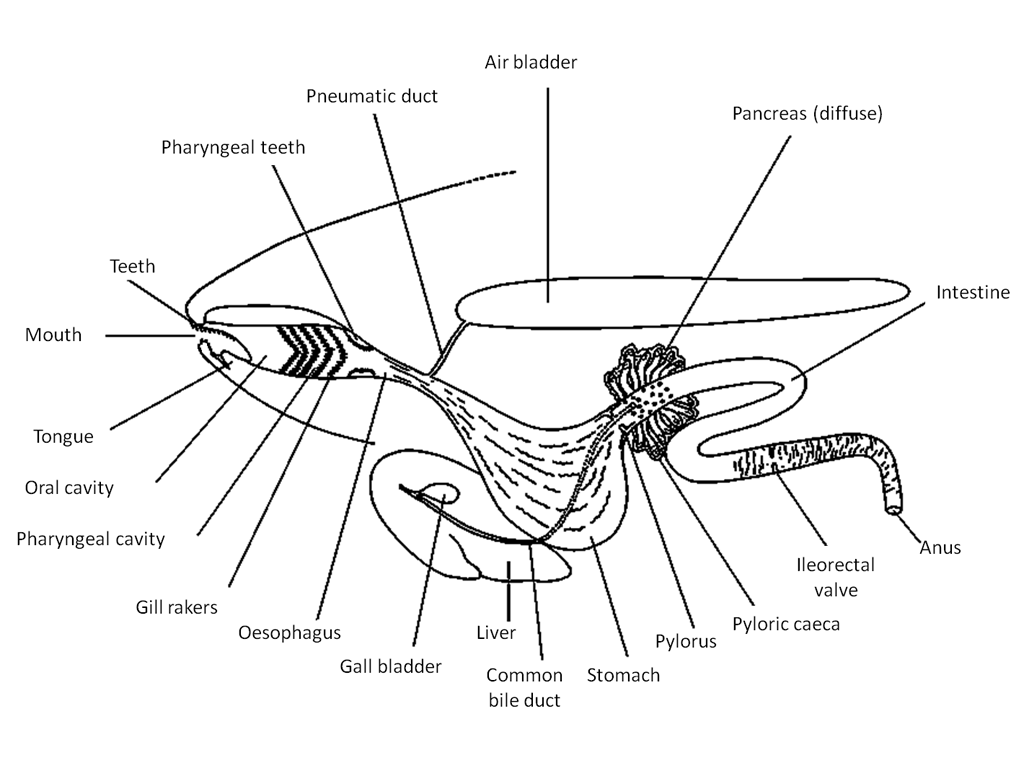 The digestive system is responsible for all phases of feeding and nutrition, from ingestion, swallowing, digestion and absorption, to egestion (or defecation) in order to be used for growth and maintenance of body structures. In teleosts, this system consists of a digestive tube or tract (mouth, oral cavity, pharynx, oesophagus, stomach, intestine and anus), and associated accessory glands (liver and pancreas) (Fig .1). The anatomy and physiology of the digestive system are closely related to the diet and trophic habits of the species. Variations of the basic morphological pattern are expressed mainly in the shape of the mouth and the type and number of gill rakers, the presence of a stomach, the presence and number of pyloric caeca and the length of the intestine. Food, as well as water for respiration, enters through the mouth, which is surrounded by lips, formed of immobile raised integument. The jaws take part in capturing food. The most conspicuous structures within the oral cavity are teeth, oral valves and tongue (Fig. 2). Teeth are bony formations used for grasping and breaking food. They grow not only in the jaws, but also on various bones of the palate and tongue. Teeth are usually cuspidate, homodont and polyphyodont, andsome teleosts though lack teeth altogether. The oral or bucal valves, one dorsal and the other ventral, are mucosal folds behind the teeth. During exhalation, these valves prevent reflux of water. The tongue is a fold of the mucosa (see Fig. 2) with many sensory corpuscles and skeletal support, it is practically immobile. Fish lack salivary glands. The oral cavity continues into the pharynx, which has both digestive and respiratory functions (see  Fig. 2 – Musculoskeletal.) 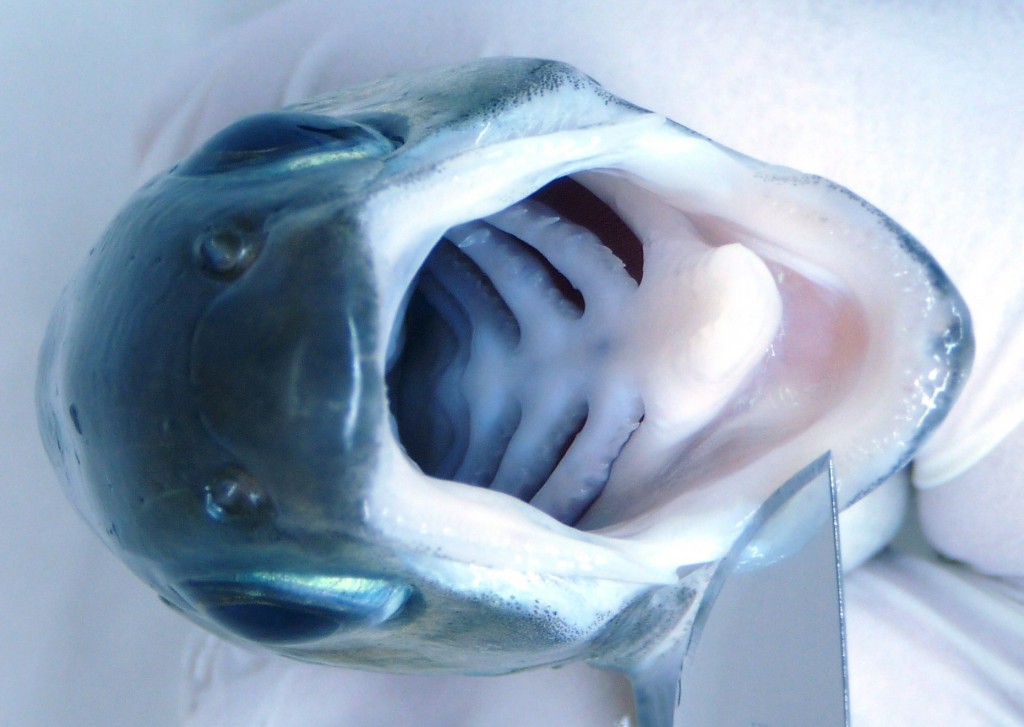 The pharynx has five pairs of lateral gill slits separated by their corresponding branchial arches (see Fig 2 – Musculoskeletal), which open into the opercular chamber. The pharyngeal or inner face of each branchial arch usually has two sets of gill rakers (Fig. 3), that retain food and other suspended particles, preventing their passage into the gills. Some species have upper and lower pharyngeal tooth plates before the beginning of the oesophagus (see Fig. 2 Musculoskeletal), which take part in grinding food. Glandular derivatives such as thyroid, thymus and ultimobranchial bodies are formed from the pharynx during development (Endocrine system, Haematopoietic system). The pharynx continues as the oesophagus, although it is difficult to ascertain a difference between the two regions. 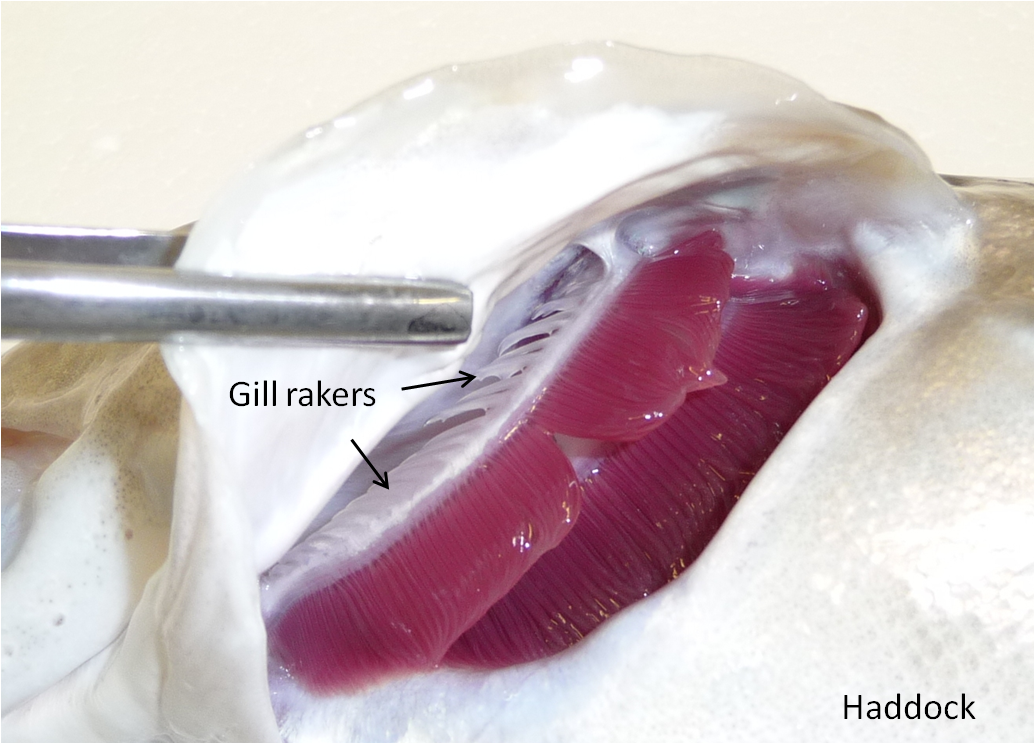 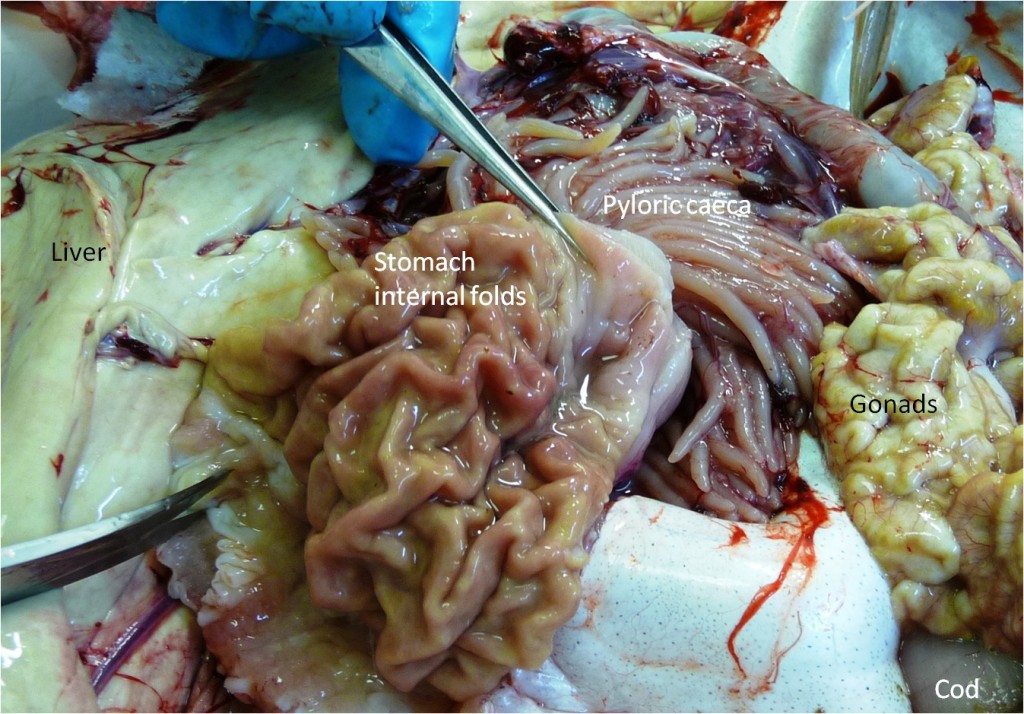 The oesophagus is a communicating passage, usually short and straight, with longitudinal folds that allow it to expand considerably. The muscle layer of the anterior part is striated, and is gradually replaced by smooth muscle posteriorly. The junction with the stomach is almost imperceptible.The stomach is usually the most muscular part of the tube and may have different shapes: straight, J-shaped or U-shaped. Some teleosts, mainly herbivorous, microphagous and detritivorous species, have no stomach. The stomach has longitudinal folds (Figs. 4A and 4B) which are deeper at the posterior end. Food is stored briefly in the stomach, where it undergoes mixing and primary digestion by mechanical and chemical action. Stomach wall’s cell secrete hydrochloric acid and proteolytic enzymes needed for protein digestion. The pasty, acid mass thus produced is called chyme. Between the stomach and the intestine there is a pylorus which may be a muscular sphincter or a simple fold of the mucosa that acts as a valve. The length of the intestine is highly variable and depends on the diet of the species. It is long and sinuous in herbivores, short in carnivores and intermediate in omnivores. If there is no stomach, the intestine continues from the oesophagus. In many species the intestine has digitiform evaginations almost immediately after the pylorus, called pyloric caeca, appendices or sacs, which vary in number from one to over 1,000 depending on the species (Fig. 5). 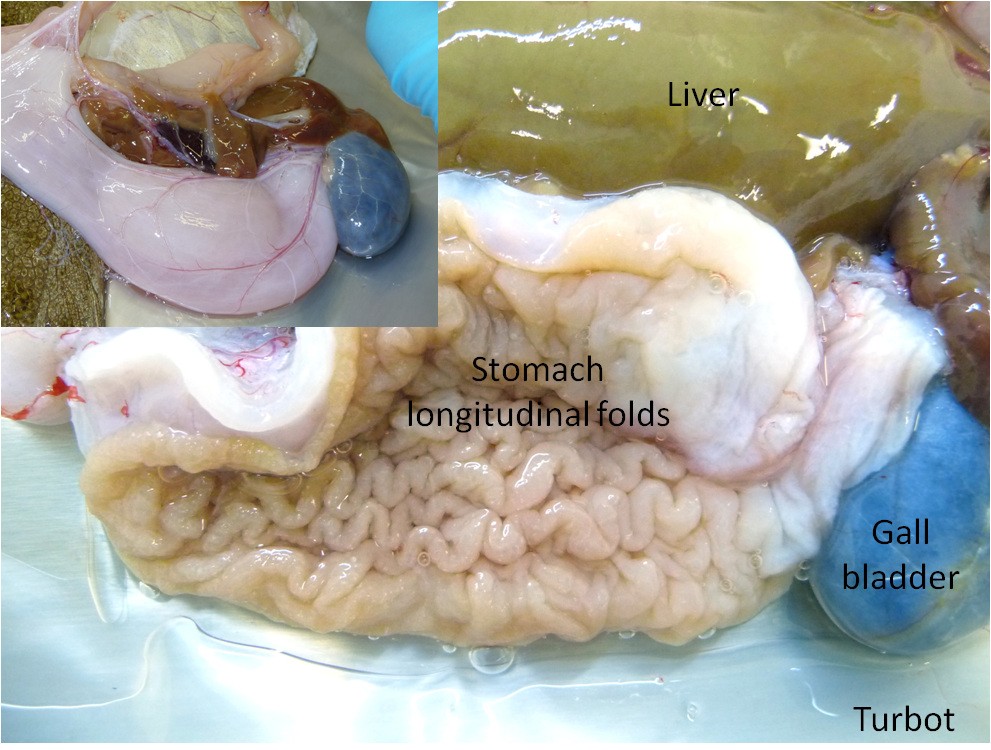 The caeca take part in digestion by secreting enzymes. The intestine has longitudinal and transversal folds (Fig. 6) that increase the surface area for absorption. In many species, the anterior intestine is separated from the posterior intestine, called rectum, by an ileo-rectal or annular valve (see Fig. 6), which prevents reflux of faeces. The intestine opens to the outside through the anus, which is equipped with a muscular sphincter. The intestine completes digestion by mechanical and chemical action, absorbs food, and plays an important part in absorbing water and electrolytes. When chyme from the stomach enters the intestine, it receives alkaline bile from the liver, and pancreatic juice and secretions from many glands located in the intestine walls, which complete digestion so that the resulting products can pass into the bloodstream. In herbivorous fish, cellulose can be digested by symbiotic bacteria in the intestine. Undigested matter is eliminated as faeces through the anus. Despite the many adaptations and specializations in teleosts, there is a basic histological organization that can be recognized along the entire length of the digestive tract. From the lumen outward to the coelomic cavity, it comprises the following layers: mucosa; tunica muscularis or muscular layer, and serosa. 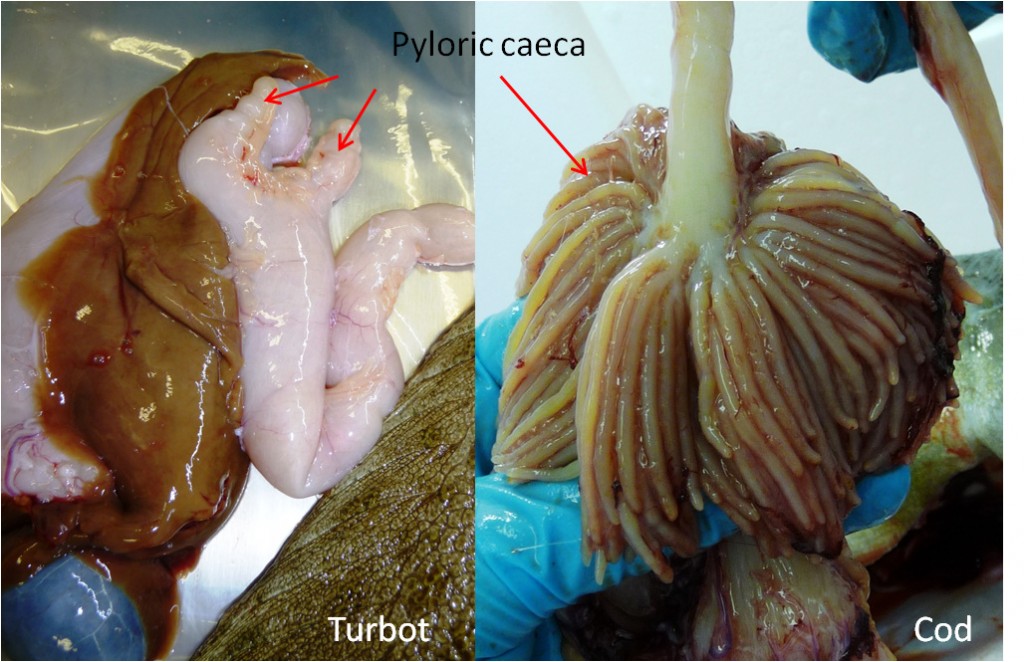 The mucosa consists of epithelium, lamina propria, muscularis mucosae and submucosa. The functions of the epithelium of the mucosa are absorption and secretion. It is supported by a lax layer of connective tissue termed the lamina propria, which contains many blood capillaries. The next layer, muscularis mucosae, is a thin layer of longitudinal smooth muscle. The submucosa consists of connective tissue with vessels and nerves, and its function is to support and nourish the previous layer. The tunica muscularis consists of a layer of circular muscle and a layer of longitudinal muscle, which help in mixing the intestinal content and performs peristaltic movements that push it backward.

In the pharynx and the oesophagus there are also variations in the positions of the circular and longitudinal layers. The serosa consists of a simple epithelium supported by a thin layer of connective tissue. The part of the oesophagus that remains outside the coelom lacks serosa. 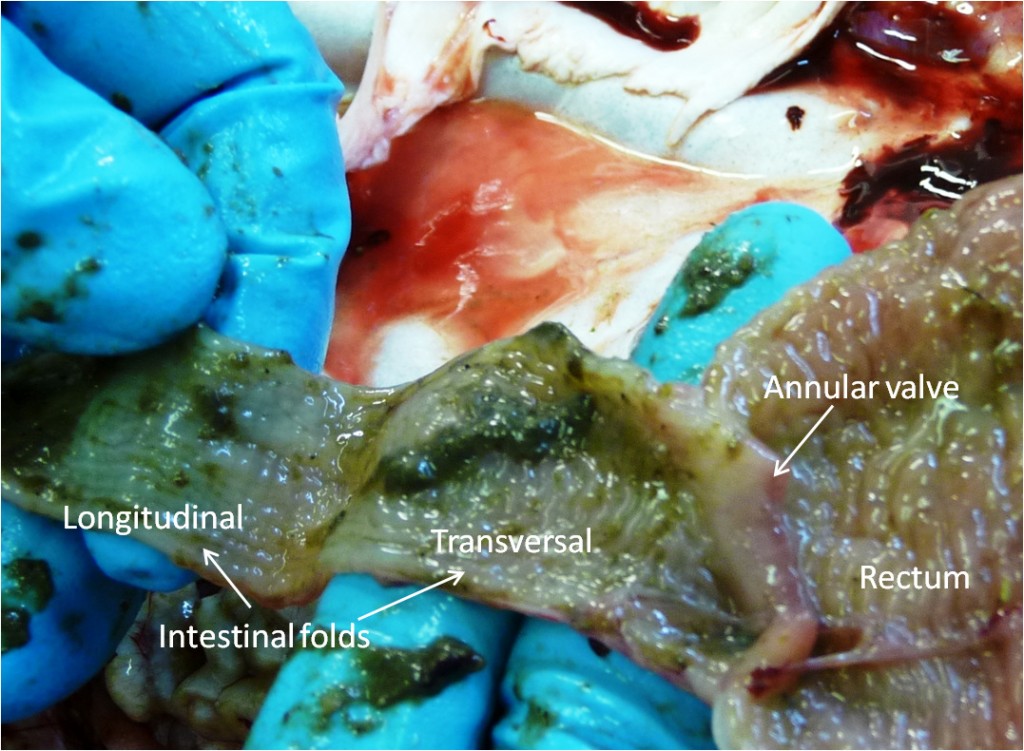 A variety of lesions may appear in the digestive tube, including peritoneal adherence, dilated and oedematous stomach, haemorrhage, necrosis, cysts, parasitic granulomas, ulcers, polyps in the mucosa, stomach inflammation (gastritis), intestinal inflammation (enteritis) and anal prolapse. The liver is the largest gland in fish. It is usually lobed and the size, shape and colour, are variable according to the species, time of year and nutritional condition. It has a number of metabolic and immunological functions, but as a digestive gland, its function is to secrete bile. It is located in the anterior part of the abdominal cavity, ventrally to the digestive tube, surrounded by a serous membrane, supported by the peritoneum and joined anteriorly to the transverse septum that separates the pericardial cavity from the abdominal cavity. The liver is a parenchymatous organ with a homogenous structure, and universal architecture which includes hepatocytes, sinusoids and bile canaliculi. Hepatocytes are the functional unit of liver and they are organized in 3 different types: cord-like form (1 cell thickness), tubular form (2 cells thickness),  and solid form (several cell thickness), with most evolved fish having the cord-like form. The hepatocytes surrounds endothelium-lined sinusoids through which blood flows. Between the hepatocytes of adjacent cords there are spaces called bile canaliculi, which carry bile. These canaliculi, which can be classified in different types, join up to form the hepatic duct. The gall bladder (see Fig. 4a) is a sac attached to the liver that stores the bile secreted by the liver. A cystic duct joins the hepatic duct to form the common bile duct or ductus choledochus, which opens into the first part of the intestine or pyloric caeca. Bile is usually greenish, but the colour may vary according to fish species and nutritional condition; the colour can be seen through the transparent wall of the gall bladder. Lesions recorded in this organ include enlargement and thickened or collapsed walls. The liver may have anomalies such as hepatomegaly, fatty degeneration (diffuse or patchy), necrosis and tumours. Lesions recorded histologically include hepatocyte hypertrophy and hyperplasia, coagulation and necrosis. The pancreas is a diffuse, macroscopically unrecognisable organ in most teleosts, and according to the species may be located on the surface of the intestine, between the pyloric caeca, embedded in fatty tissue, in the mesenteries, spleen or liver, and around the portal system. It has an exocrine and an endocrine part (Endocrine system). The exocrine portion is made up of glandular acini that secrete pancreatic fluid which is rich in enzymes that take part in protein, carbohydrate and lipid digestion. A duct carries this fluid to the intestine either directly or having previously joined the common bile duct. Lesions of the pancreas detectable histologically include atrophy, infiltration, fibrosis, apoptosis and necrosis.   Air bladder The air bladder, gas bladder or swim bladder is a characteristic organ in most teleosts, although some species are bladderless. The swim bladder is located along the abdominal cavity, dorsally to the digestive tract (Fig 7). 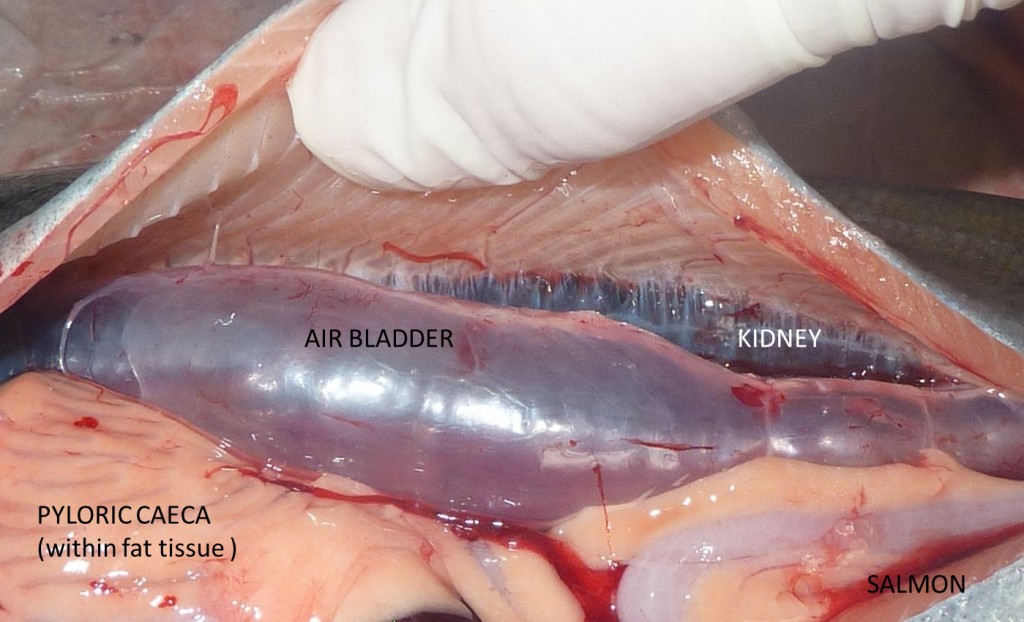 During embryonic development, the gas bladder develops from a dorsal diverticulum of the oesophagus. More primitive teleosts, in which this communicating duct (pneumatic duct) still remains, are called physostomes. More evolved groups, which have lost the duct, are called physoclists. In some groups, the bladder is divided into two or three chambers. The main function of the air bladder is to control buoyancy by means of a complex system of gas exchange. The buoyancy mechanism is based on maintaining a constant volume of gas, which can enter the bladder from the digestive tube, in physostomes, or by releasing gas from the arterial blood in the anterior region of the bladder in physoclists. A secretion and a reabsorption region can be distinguished although a great diversity can be found. In some groups, the bladder may have other functions, such as reception of sound and pressure, and sound production. Histologically, its structure is similar to that described for the digestive tract, with a less developed muscular layer. The specific structures for secreting or absorbing gas involve modifications of the epithelium of the mucosa and close participation of a network of blood capillaries. Diseases of the air bladder are infrequent. Anomalies that may be observed are adherence to the renal capsule, enlargement, opacity, haemorrhage, petechiae, adenomas and thickened wall. It may also contain liquid.