The majority of fish species are fusiform, with bilateral symmetry and strong cephalization as a result of their locomotion in a single direction, with a concentration of structures and functions at the anterior end. Their anterior, cranial or cephalic end is in the direction in which they usually move, opposite to a posterior or caudal end. 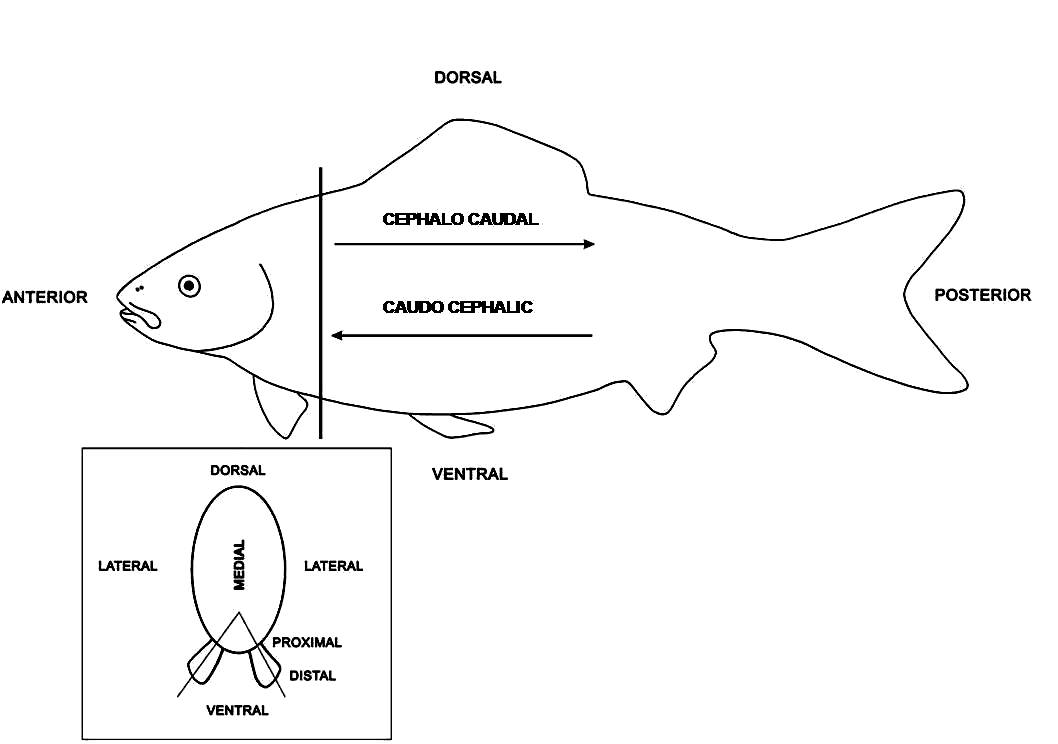 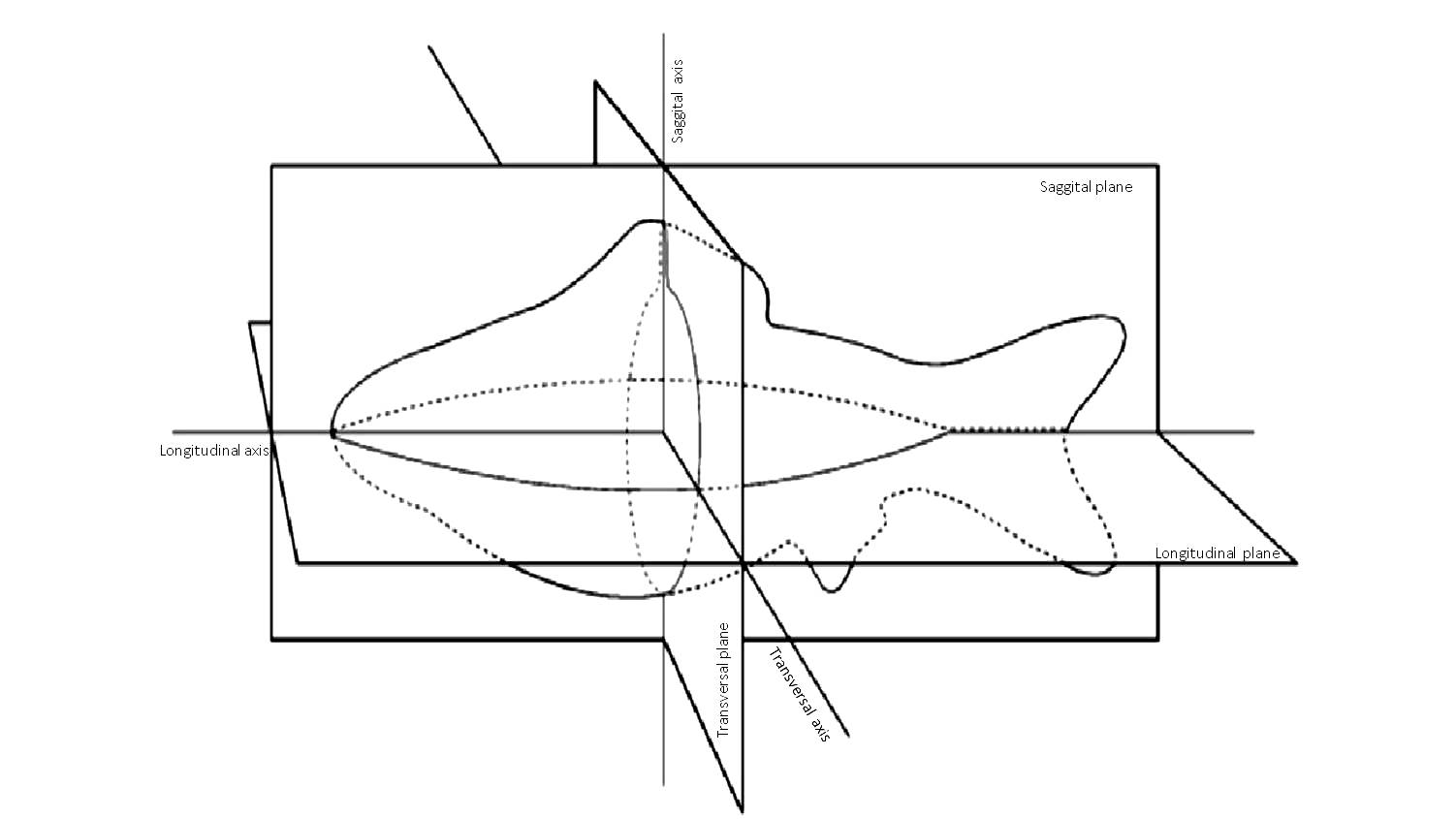 Body shapes, appendices and cavities Fish body structure is entirely adapted to living in the water, with the shape of the body and appendices reflecting habitats of individual species. The body of a fish is usually fusiform and highly streamlined, optimizing its propulsion through the water, a dense and viscous mediumwhen swimming. However, as a result of adaptation to completely different habitats, the basic pattern may vary and there are fish of different shapes such as depressiform,compressiform, sagittiform, globiform or even asymmetrical. 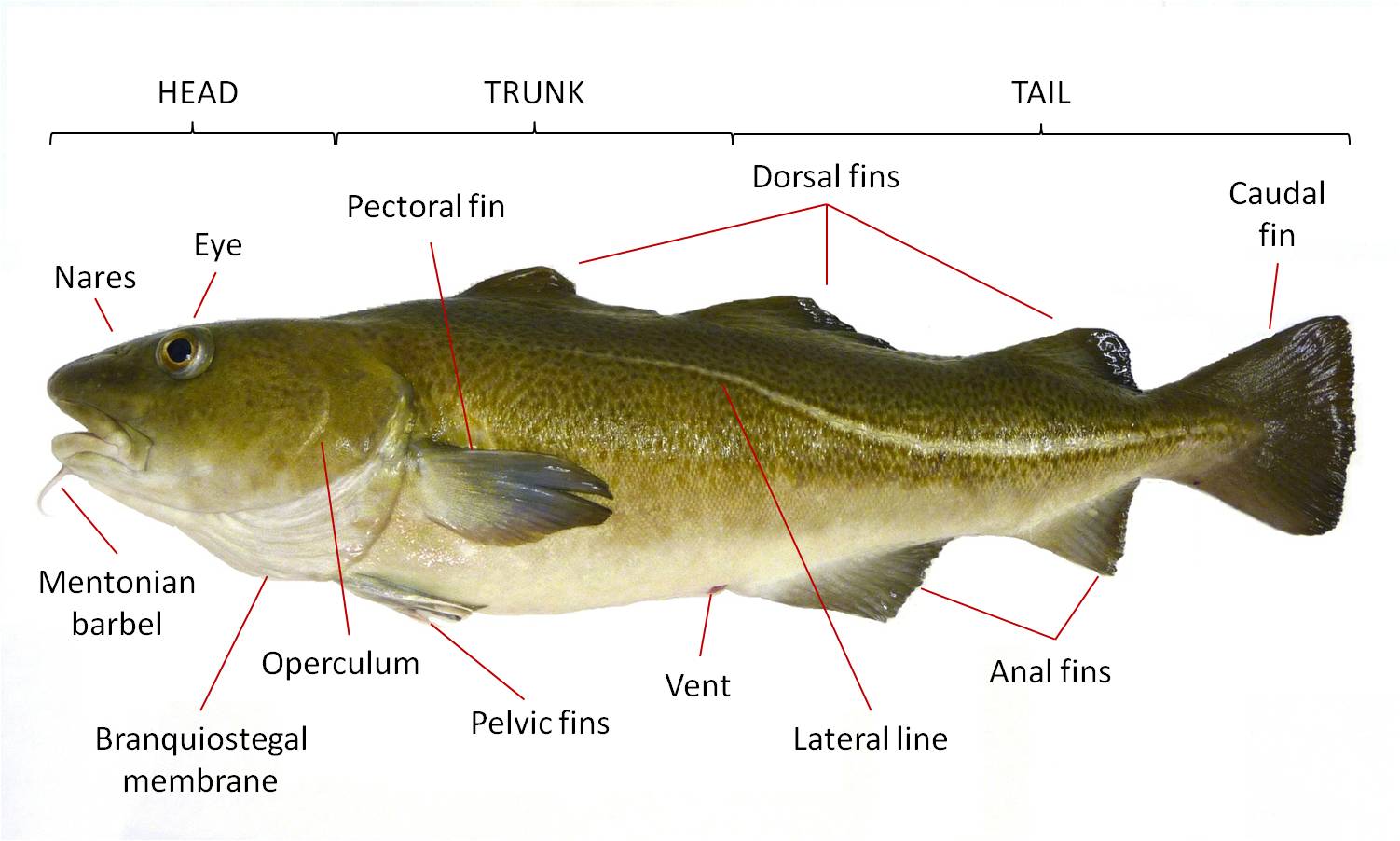 The fish body comprises three anatomical regions: head, trunk and tail (Fig. 3). The main functions of the head area are a nervous and sensorial centre, respiration and capturing and swallowing food. Externally, this covers the region from the snout to the posterior edge of the operculum, including its branchiostegal membrane (Respiratory system). This region comprises the cranium, brain, eyes, olfactory and equilibrium organs, gills, the anterior portion of the digestive tract (including pharynx) and cephalic muscles. The most conspicuous openings are mouth, opercula, nostrils and the lateral line pores. Some fish e.g. cyprinids, have barbels, a whisker-like projections of varying shape and size located usually near the mouth and nostrils,  and used mainly as a tactile and chemical organ, e.g.for prey detection. 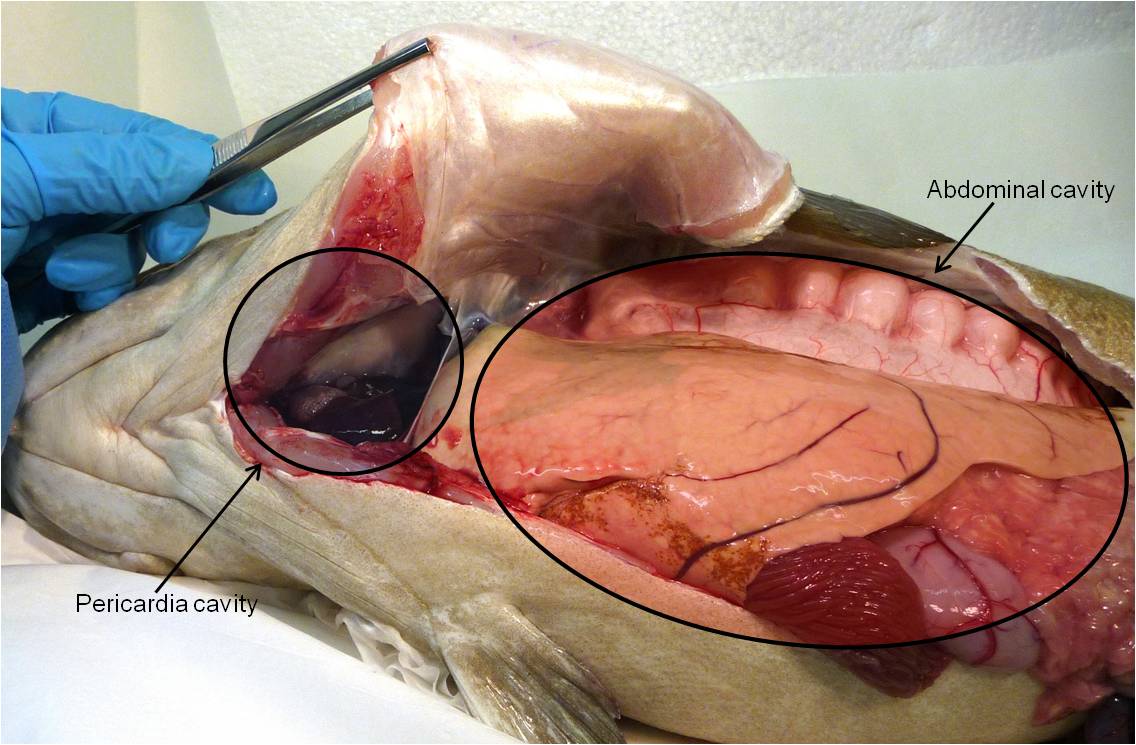 The trunk is mainly visceral and extends from the posterior limit of the head to the anus, and contains the pericardial and abdominal cavities (Fig. 4). The anterior, pericardial cavity contains the heart, and the posterior, abdominal cavity contains the digestive tube (oesophagus to anus) and its accessory glands, air bladder and gonads. The trunk also contains the skeleton, spinal cord, skeletal muscle and kidney. The visible openings on the trunk are the anus, genital and urinary pores and lateral line pores. The tail is mainly involved in locomotion and goes from the posterior end of the trunk to the posterior edge of the caudal fin. It essentially comprises skeleton, musculature and spinal cord. The only openings are the lateral line pores. Fish usually have paired and unpaired fins (see Fig. 3) whose function is mainly natatory. The unpaired fins with rays are usually one or more dorsal fins located on the dorsal mid-line, one or two anal fins located on the ventral mid-line behind the anus and one caudal fin at the posterior end of the tail. Some species also have a fleshy fin without rays, called adipose fin, behind the dorsal fin, e.g. salmonids. The paired fins are the pectoral and the pelvic or ventral fins. The location of pelvic fins varies considerably among different teleost groups, and they may be abdominal, thoracic, jugular or mental, according to their position.Fins may sometimes be reduced, modified to fulfil other functions or absent. 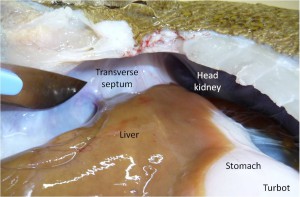 The trunk contains two coelomic cavities, pericardial and abdominal, separated by a transverse septum and lined with peritoneum, a fine membrane that also covers the organs and ducts contained in the cavities. The oesophagus and hepatic veins pass through the transverse septum (Fig. 5).