Haematopoiesis or haemopoiesis is the process of formation, development and maturation of the cellular components or blood cells (erythrocytes, leucocytes and thrombocytes). All blood cells originate from undifferentiated precursors cells called haematopoietic stem cells, which are distributed in different organs and tissues and subsequently mature in the peripheral blood. In teleosts, this function takes place in the anterior kidney, and to a lesser extent, in spleen, thymus, digestive tube and epicardium. Some authors also include skin, gills and liver. 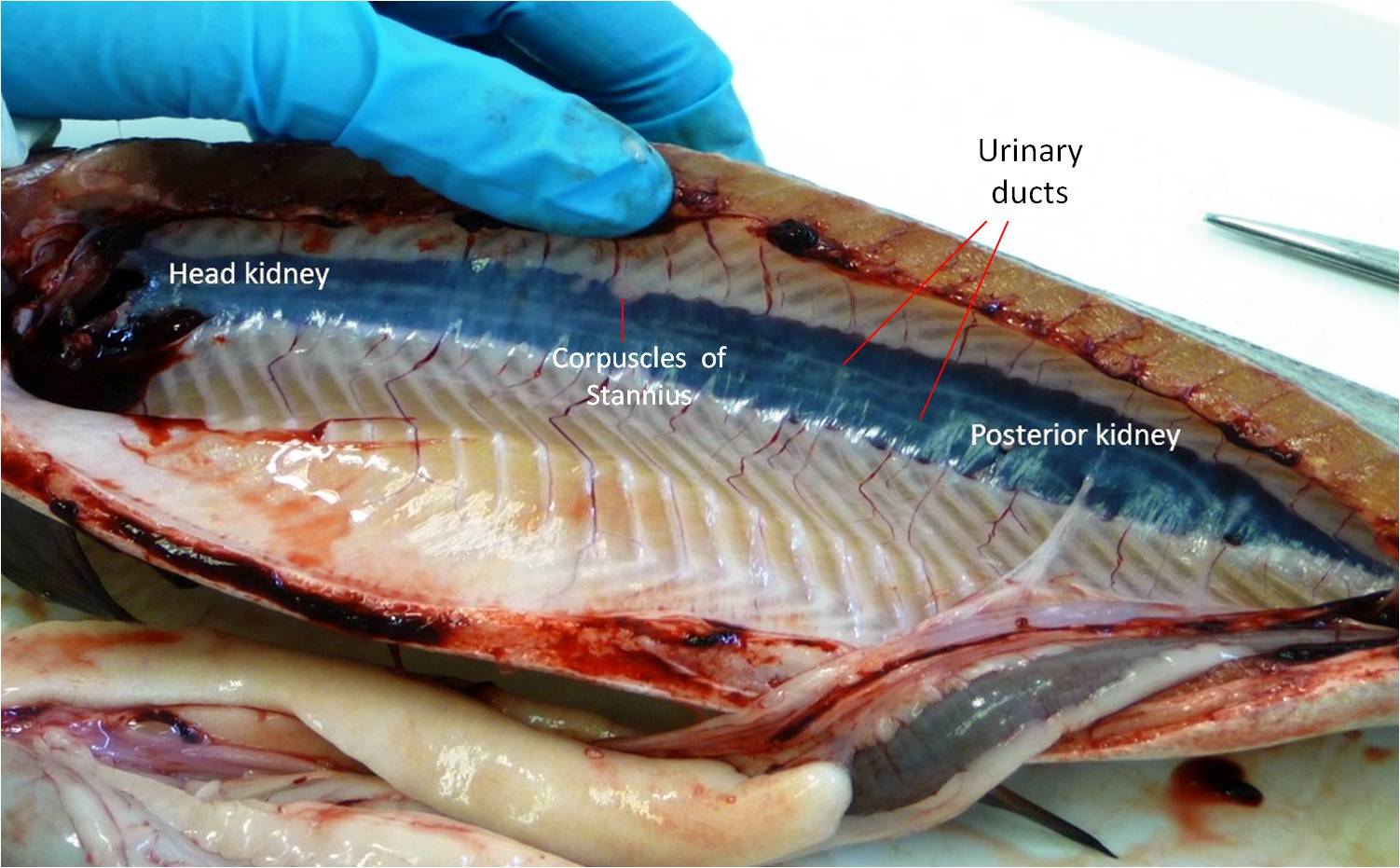 The kidney (Excretory system) is the main teleost haematopoietic organ. Haematopoiesis is the mail function of the tissue of the anterior or head kidney (Fig. 1), which produces erythrocytes, leucocytes and thrombocytes. The kidney is also involved in antigenic capture and is one of the main sources of antibodies. The head kidney consists of a matrix of highly vascularised reticuloendothelial tissue, containing haematopoietic stem cells, plus mature and immature blood cells and free macrophages. There are also discrete encapsulated structures, the melanomacrophage centres (MMC), which are aggregates of melanomacrophages and lymphocytes and may represent the primitive analogue structure to the germinal centres of the lymph nodes in mammals. MMCs act as a focus where antigens such as resistant intra-cellular bacteria are deposited, and they play a role in capturing and depositing iron, which is particularly important in haemolytic infections. They also play a part in capturing and presenting antigens to lymphocytes and in sequestering the products of cell breakdown or potentially toxic particulate matter, such as melanin, free radicals and catabolic breakdown products (Immune system). Research suggests that the MMCs play a major role in melanin synthesis, rather than merely being a melanin deposit. The size of the MMCs increases with age, with cachexia, or due to chronic inflammatory lesions, but also in response to conditions of environmental stress, suggesting that they may be used as bio-markers for water quality. There is also a smaller amount of renal haematopoietic tissue in the interstitial tissue of the middle and posterior parts of the kidney. Among common macroscopic anomalies of the kidney are necrosis, granular and granulomatous lesions and mineral deposits, the later affecting mainly middle to posterior kidney. 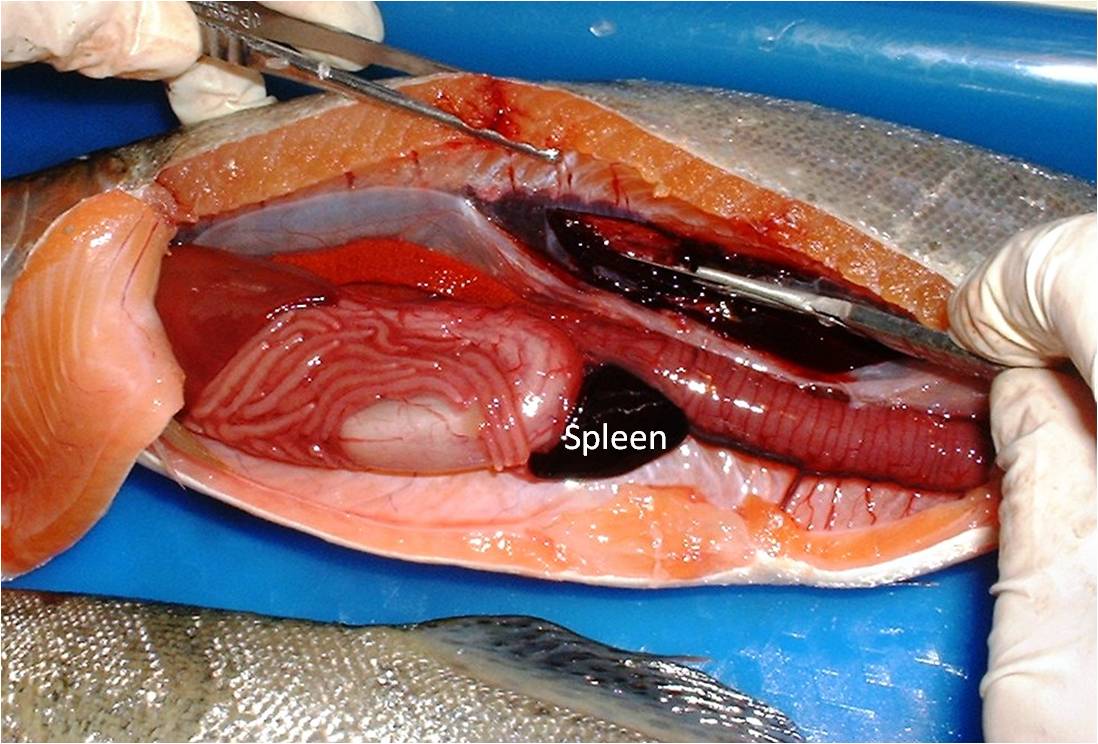 The spleen is a discrete unpaired organ with net borders, of variable colour, usually dark red. It is located at the curve of the stomach, or in stomach-less fish, near the intestine (Fig. 2). It is surrounded by a fine fibrous capsule with little evidence of contractile capacity, its main components are pulp (red and white), ellipsoids and MMCs. It produces erythrocytes, leukocytes and thrombocytes and is usually an accessory haematopoietic organ, though some species such as trout, for example, it is the main source of blood cells and serves as a red blood cell reservoir. Since teleosts lack lymph nodes, the spleen is one of the main filters in the circulatory system, removing circulating antigens and deteriorated or dead blood cells from the bloodstream. It thus has some degree of participation in any systemic infectious disease.

Among the macroscopic anomalies of the spleen are splenomegaly, thickening of the capsule, granular appearance, atrophy, necrosis and marbled colouring on the surface. 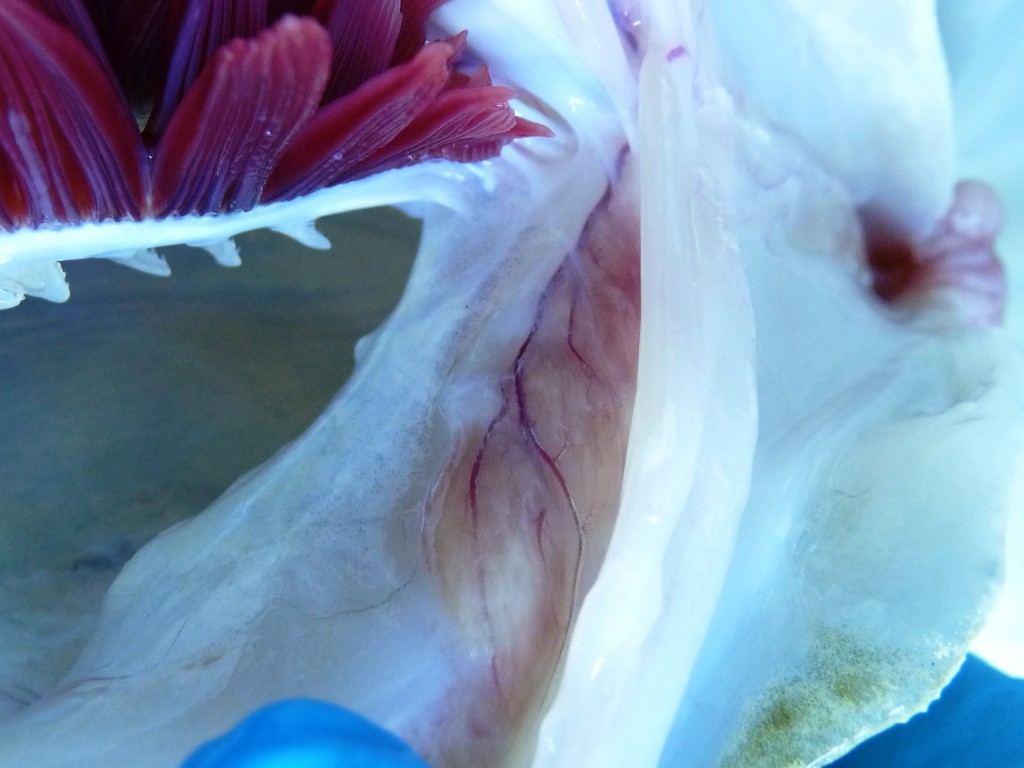 The thymus is a paired subepithelial organ located in the upper quadrat of each opercular cavity, just under the operculum, although its location and structure may vary among species (Fig. 3). The thymus is surrounded by a fine capsule of connective tissue. Its parenchyma consists of lymphoid tissue; the main cellular components are thymocytes, but there are also lymphocytes and macrophages, among other cells. In some species there is an apparent arrangement of cortex and medulla, as well as corpuscles comparable to Hassall’s corpuscles in the thymus of mammals. It only produces T-lymphocytes (Immune system).

The thymus varies throughout ontogeny. In some species it appears a few days after hatching, while in others it only appears after larval metamorphosis. It also undergoes different involution processes that are more dependent on seasonal changes and changes in hormonal cycles than on age, e.g. in some species it disappears when the adult stage is reached, often at spawning, as occurs in other vertebrates. However, in other species it remains functional for several years after maturity. It also has an endocrine function (Endocrine system). There is little information on pathological changes in the thymus.

Some haematopoietic tissue may also be found in the epicardium.