Fish skeleton interacts with a complex muscular organization resulting in a segmented body model capable of precise control of swimming movements, highly adapted to live underwater. The skeleton is formed by bones and cartilage and works in synchronization with the muscle, by means of tendons and ligaments. The supporting and connecting tissues can be grouped into three categories: bony, cartilaginous and connective. They are mainly made up of extracellular matrix. Usually fish  swim by means of the undulating movement of the trunk and tail, mechanically the most efficient form of propulsion. However, some species make also use of their paired and unpaired fins for locomotion. Both body size and shape remain almost unchanged during the lateral undulation, only the relative position of the different parts of the body changes.

Locomotion occurs as the result of undulating movements produced by the sequential contraction of segmental muscular blocks called myotomes or myomers. The muscle blocks on one side contract while those opposite relax, thus flexing the entire body alternately from side to side. As the trunk and tail bend from side to side, they generate propulsion forces propelling the fish forward through the water. Muscle development is closely related to the bone to which it is attached and also varies with age, exercise and fish nutritional status. In the majority of fish muscle continues to growth throughout life and therefore musculature enlargement is a combination of newly formed  cells and increased size of pre-existing fibres. Skeletal muscle includes cephalic, trunk and tail, and appendicular musculature. The skeletal muscle of the trunk and tail plays the most important part in locomotion and is stronger than the appendicular musculature, controlling the fins. Appendicular muscle derives from trunk myotomes, and only play a secondary part in locomotion, at least in the species that move by means of lateral undulation. In addition, there are cephalic muscles associated to the opening and closing of the mouth and opercula, and to eye and gill movement. 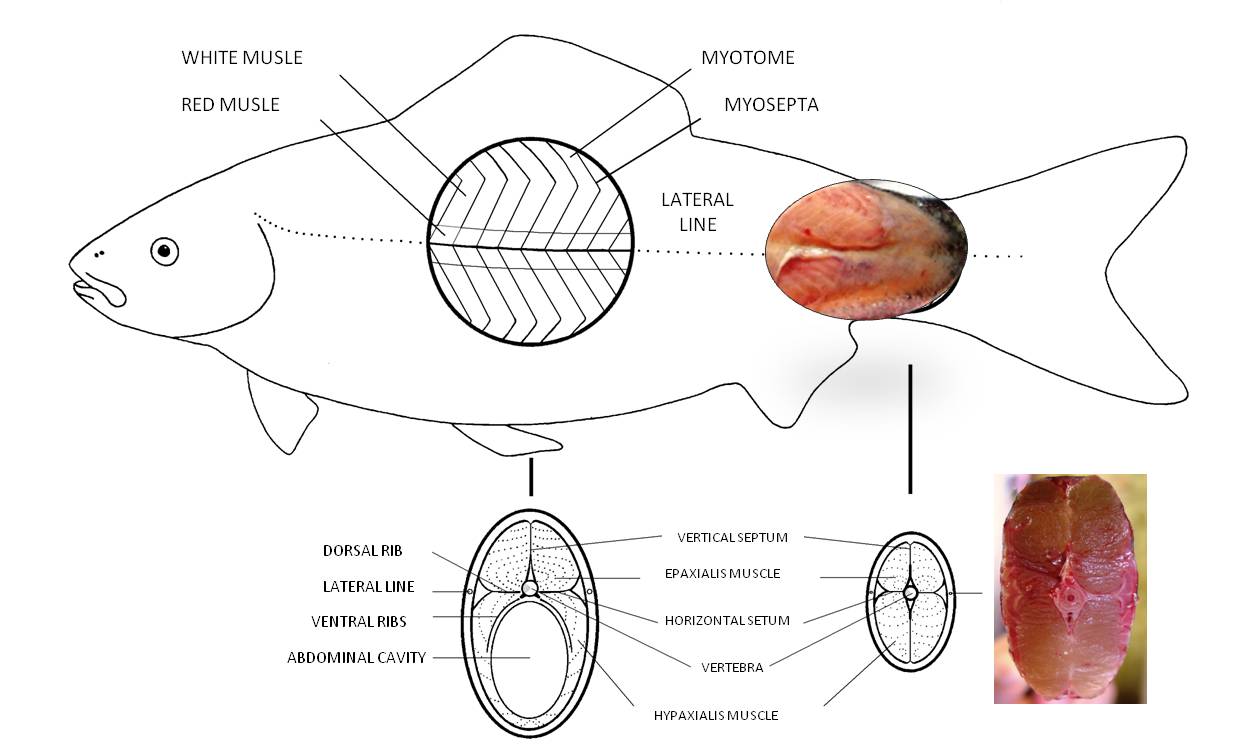 The myotomes are shaped like a W viewed sideways and arranged in segments or metameres along the body (Fig. 1). Adjacent myotomes are separated by membranous septa or myosepta, made of connective tissue, and each myotome is attached to several ribs. A cross section shows that each vertebra is surrounded by muscle blocks that occupy the quadrants of the body (see Fig. 1). The four muscle blocks are separated by vertical and horizontal septa made of connective tissue, so that there are two dorsal or epaxial blocks and two ventral or hypaxial blocks. The epaxial musculature extends in the form of two longitudinal cords from the trunk to the tail. In contrast, the hypaxial musculature is arranged latero-ventrally in the trunk, surrounding the pericardial and abdominal cavities up to the anus, and extending into the tail, in which there is no abdominal cavity, in the form of two solid muscle cords. Muscles are attached to the skeleton by means of tendons composed of connective tissue. This attachment plays an important part in swimming, as it joins the skeletal muscle to the vertebrae. All the skeletal muscle is striated, with each striated cell or fibre, being multinucleated. Each fibre contains several longitudinal myofibrils made of several myofilaments. Each muscle fibre is surrounded by a thin layer of connective tissue, the endomysium. Histological, histochemical and biochemical studies show that there are two main types of skeletal muscle in fish: red and white. Red muscle is highly vascularized, contract slowly, is able to sustain contraction and have aerobic metabolism. Being highly vascularized makes it a preferred site for injecting drugs and anticoagulants because it distributes them rapidly throughout the body. White muscles are less vascularized, contract rapidly and less sustainably, and have anaerobic metabolism. Most of the myotomic muscle is made up of white fibres, while the red fibres are located in fine longitudinal bands under the skin, mainly along the lateral line. In some groups of fish there is a third type of muscle – pink -arranged in mosaic pattern, located laterally in layers of different thicknesses between the red and the white muscle. The pink muscle fiber, is characterized as fast contracting with intermediate resistance to fatigue and intermediate speed of fibre shortening. Some teleosts have electric organs, mostly derived from muscle fibres that lose their ability to contract but retain the capacity of generating and accumulating an electrical potential difference. The increase in the number of muscle fibres throughout the lifetime of the fish plays an essential part in tissue repair, while the endomysium plays an important part in the inflammatory process. Muscular pathologies include atrophy, liquefactive necrosis, inflammation, hyaline and granular degeneration and fibrosis with pigmentation (Fish Pathology Archive) .

The skeleton maintains the body shape and has sections that act as levers that are moved by the attached muscles. It also provides protection to certain organs and systems as well as acting as a calcium reservoir. The skeleton may be classified into axial and appendicular. The axial skeleton comprises the cranium, vertebral column and ribs. The cranium consists of a rigid part to which interdependent elements are attached, such as mandibles, gill arches, opercula and branchiostegal rays, many of which take part in breathing and feeding movements. The five pairs of gill arches support the gills (Fig. 2). 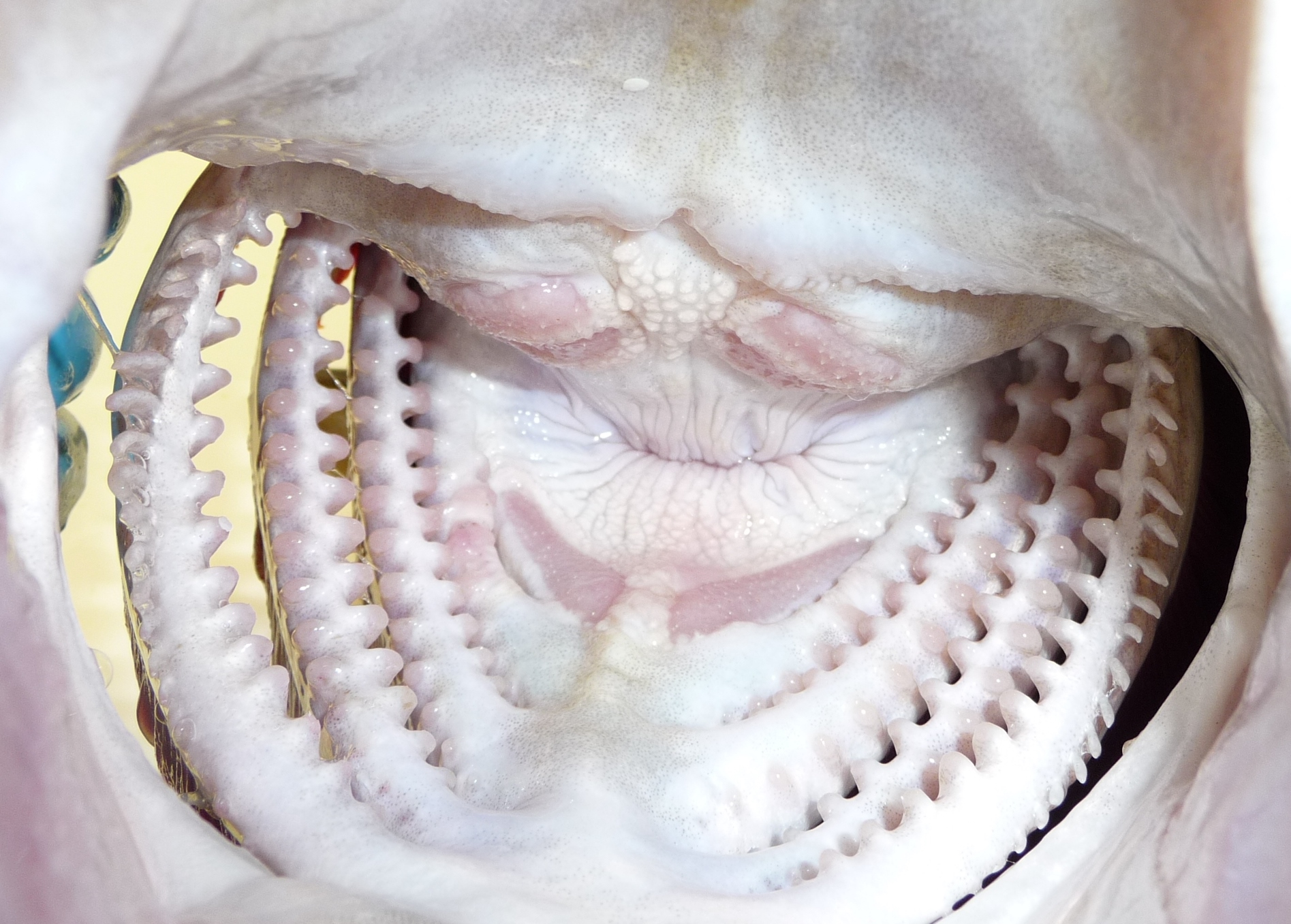 The cranium is in contact with the vertebral column, composed of vertebrae. The number of vertebrae varies among species and even within a species, depending on the environmental conditions under which the larval stage developed. Vertebrae articulate to each other by means of apophysis and are held together by ligaments. They are usually modified according to the region of the body from where they originate. Each vertebra consists of a body and one or two arches. Vertebrae in the trunk have a single neural arch, located dorsally, while tail vertebrae have a ventrally located hemal arch in addition to the neural arch. Each arch extends into a spine (neural or hemal, according to the arch it derives from), and these spines support the rays of the unpaired fins. Ribs are located in the trunk region and are always related to the vertebrae. There are two types of ribs, according to their location: dorsal or epipleural and ventral or pleural. Dorsal ribs are located in the horizontal septum, between the epaxial and hypaxial musculature, at the intersection with myosepta. Ventral ribs develop in the myosepta between the peritoneum of the abdominal cavity and the ventral (hypaxial) muscular masses and articulate with a ventrolateral apophysis of the vertebrae Many teleosts have small, thin bones in the myosepta, called intermuscular bones. The appendicular skeleton comprises the bones of the paired appendices, including their girdles, and the unpaired appendices. All fins are supported by small proximal elements (pterigiophores) and bony rays. The paired appendicular skeleton consists of the bones of the pectoral and pelvic fins and their corresponding girdles: scapular or pectoral and pelvic. The pectoral girdle is an arch of several bones, which takes part in the articulation of the pectoral fins and makes contact with the cranium. The pelvic girdle provides articulation for the pelvic fins. In more evolved teleost groups, the pelvic girdle and fins are located in a more anterior position and are sometimes in contact with the pectoral girdle. Paired fins vary in shape and position, and one or both of them may occasionally be reduced or modified. Pelvic fins in particular may be found in abdominal, thoracic, jugular or mental position in different groups of fish (see species necropsy series). The unpaired fins – dorsal, anal and caudal – are not supported by girdles. The function of the dorsal and anal fins is stabilizing. They may vary in number and their pterigiophores are located within the vertical septum. The caudal fin is propulsive, lacks pterigiophores and is supported by the last vertebrae which are fused together forming the urostyle, which slants upward. 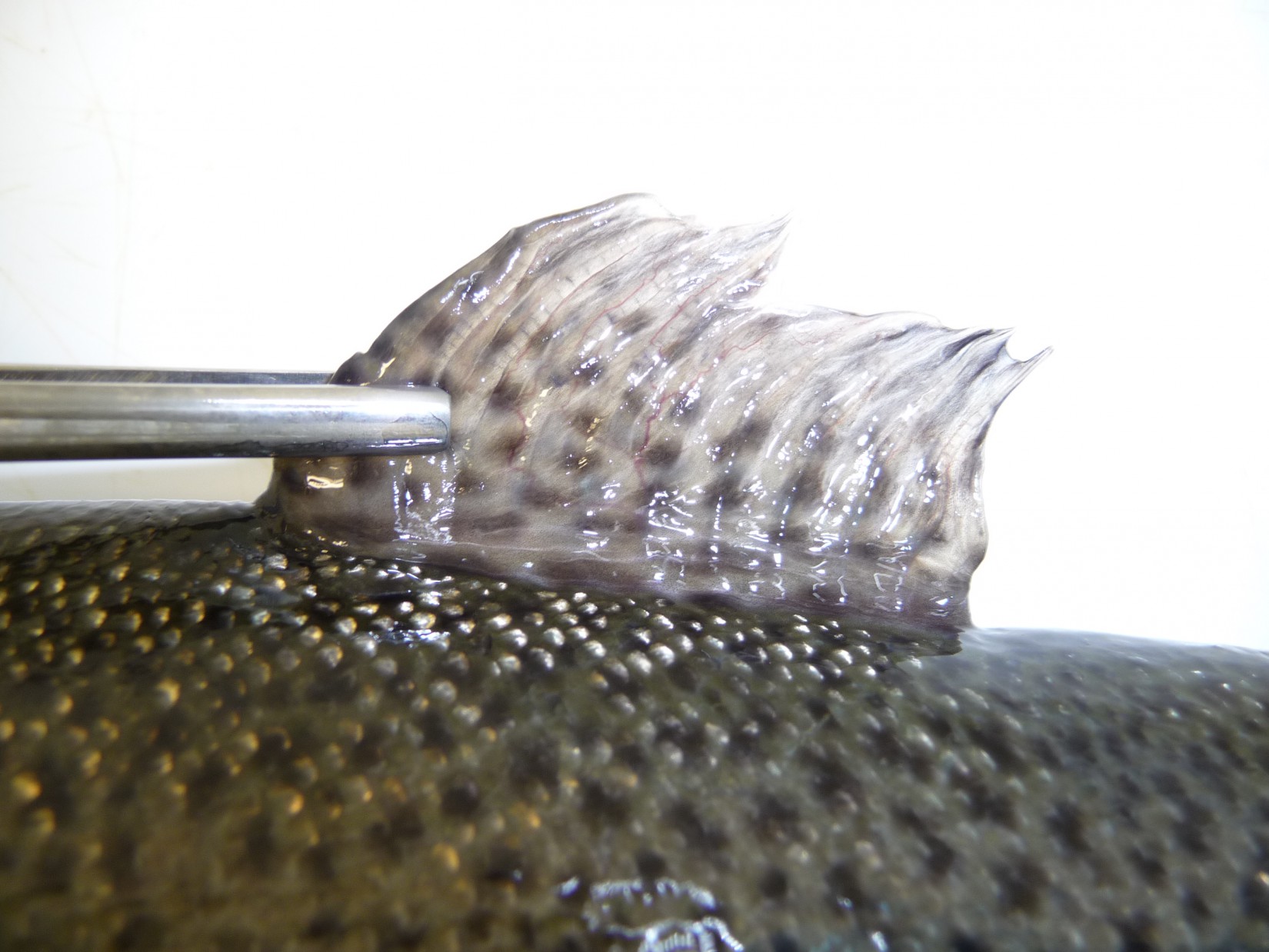 Several hemal arches of the vertebrae that form the urostyle are developed and compressed, forming the hypurals, and several neural arches form the epurals. Both of these, particularly the hypurals, support the rays of the caudal fin. Bony rays play the main support of fins (Figs. 3 and 4) and their number is characteristic for each species. Primitive groups have “soft rays” which are usually flexible, segmented and often branched. More evolved groups also have “spiny rays”, which are usually rigid, non-segmented and never branched. These rays support the first dorsal fin or the anterior part of the dorsal fin and the anal fin. Ligaments, made of connective tissue, hold bones together at the joints. Cartilage is the primary constituent tissue of the skeleton in juvenile teleosts and does not disappear completely in adults. It consists of a matrix of fibres and intercellular substance. Within the matrix there are lacunae containing cells called chondrocytes. Cartilage is surrounded by a membrane of connective tissue called perichondrium. 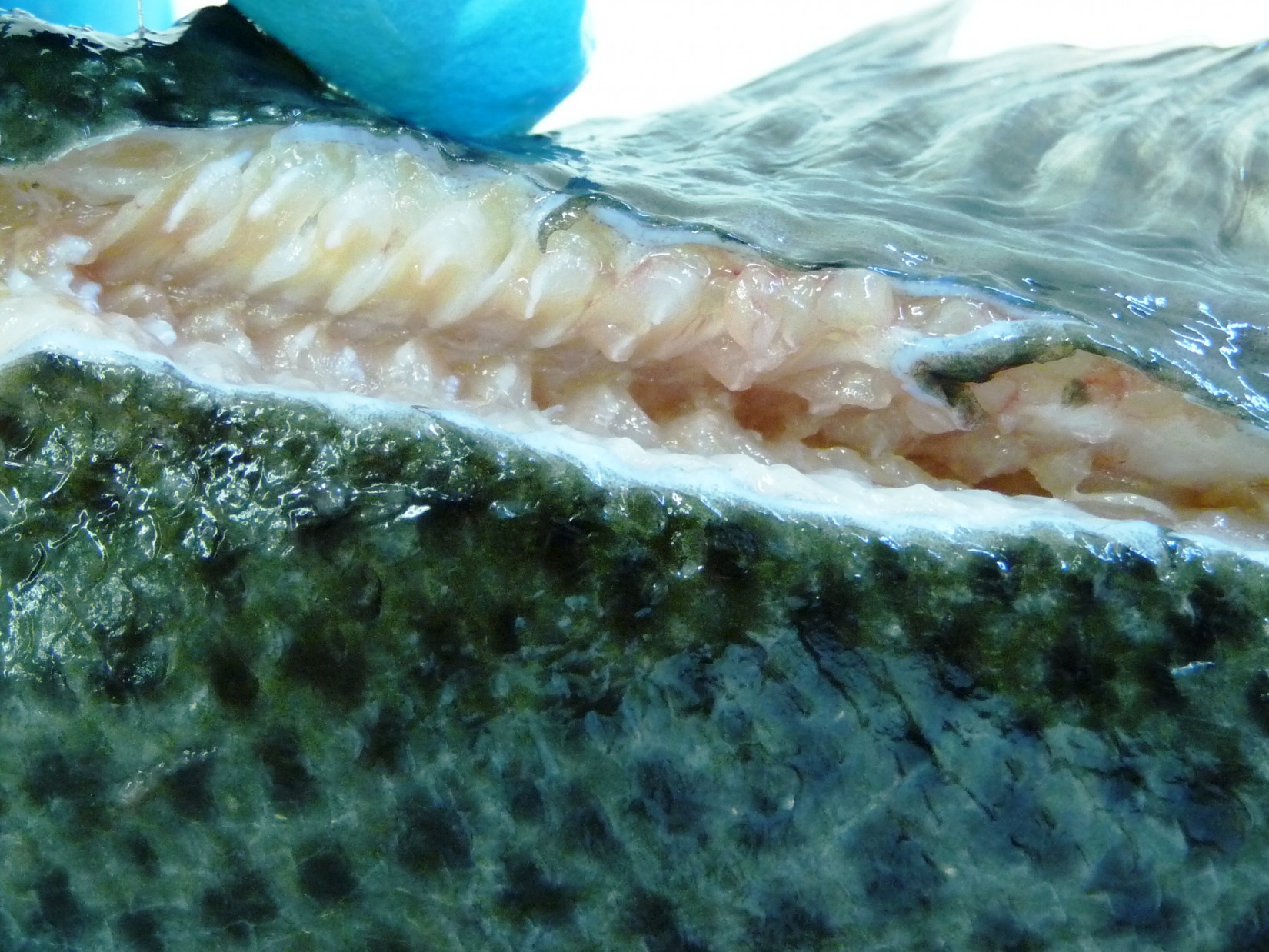 There are two types of bone in teleosts: cellular and acellular. Cellular bone is typical of less evolved teleosts and is made of a matrix of fibres and intercellular substance with lacunae containing cells called osteocytes. Acellular bone, characterized by absence of cells, appears in more advanced groups and is unique among vertebrates. The intercellular bone substance contains different calcium and phosphorous salts. Bones are covered by a thin layer of connective tissue called periosteum. Only cellular bone can recover from damage, and it does so by means of osteocytes. Fish may have bone deformities such as shortened opercula and tail, deformed jaws, lordosis, scoliosis and spondylosis, due to diverse aetiologies (Fish Pathology Archive). In addition, fractures, osteomas and chondromas can be found.