The entire fish including the fins is covered by the skin or integument, which constitutes the limiting surface between the fish and its surrounding environment, the water. The skin is the envelope that provides both communication with the environment as well as protection against adverse external agents or mechanical damage, with a high capacity for healing and regeneration. Important immunological, osmoregulatory, excretory, respiratory and stimuli reception processes take place in the skin, enabling the fish to adjust to changes in the environment and thus contributing to maintaining homeostasis. 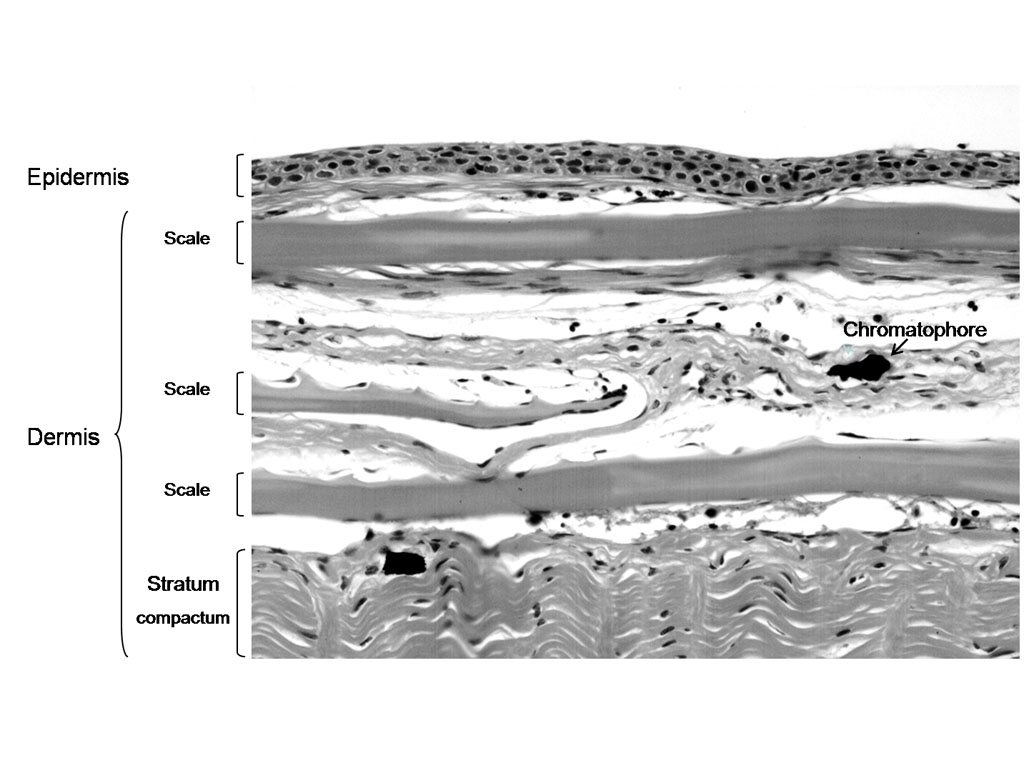 The skin has two main layers, epidermis and dermis, the later contains the scales (Fig. 1). The epidermis is a fine superficial layer which thickness depends on factors such as fish species, age, sex, time of the year, degree of maturation, location in the fish surface and on adaptations to the environment. The epidermis consists of an outer layer of cells that form a stratified epithelium, and a deeper layer of undifferentiated cells, called basal germinative layer, adjacent to an acellular basal lamina or basement membrane, that separates the epidermis from the dermis. The germinative layer produces epithelial cells that move towards the surface to replace the cells that are shed from the outer layer. In some teleosts the skin of certain parts of the body has keratinized structures such as tubercles; however, this is not typical because fish do not need to protect from desiccation. Among the different kinds of cells in the epidermis there are mucus secreting cells, which are generally distributed over the entire body. They vary in number according to the parts of the body and fish species, for example a high number can be seen on the fins. The secreted mucus, is composed mainly of mucopolysaccharides that acts in osmoregulatory and immunological processes, protects against mechanical damage and reduces friction. The epidermis also contains other types of cells such as chemosensory cells and macrophages. The high healing capacity of the epidermis is due to the ability of epithelial cells to migrate towards the wound, quickly generating a protective mechanical barrier against opportunistic pathogens. Moreover, epithelial cells facilitate the process of repair by means of their phagocytic and proteolytic activities. The dermis, located just below the basal membrane, is thicker than the epidermis andrich in blood and lymph vessels which nourishes the skin, however the main component is fibrous connective tissue. The dermis provides structural support to the skin, fulfils an important respiratory function and is crossed by nerves that extend towards the surface. The dermis is made up of the outer spongy layer (stratum spongiosum), with the chromatophores and scales, and the deeper, compact layer (stratum compactum), which has a higher proportion of fibres and provides the firm yet flexible support. The hypodermis, a thin layer of lax, highly vascularized tissue containing adipose cells, is located beneath the compact layer and links with the skeletal muscle. Inflammatory responses are common in the hypodermis in response to infectious processes. The scales are fine bony plates with different degrees of flexibility that originate from dermal pockets and are covered by epidermis (see Fig. 1). In the skin the scales overlap like roof tiles, facilitating movement and swimming through the water. Different parts are recognised, circuli, annuli, the focus and radii (Fig. 2). 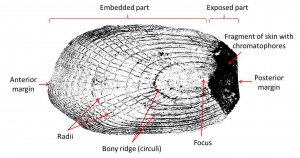 Each scale has an anterior end which remains inside the dermis, and a free posterior end. There are two different types of teleost scales: cycloid, with a smooth posterior margin, and ctenoid scales, present in more evolved teleost fish,with spiny or comb-shaped projections on its posterior margin.Scales also serve as a source of calcium during long periods of fasting. The scales along the fish lateral line have perforations that communicate the lateral line canal with the surrounding water (Fig. 3).There are also some scaleless fish with ‘naked skin’, and others that have only a few modified scales on the body surface. 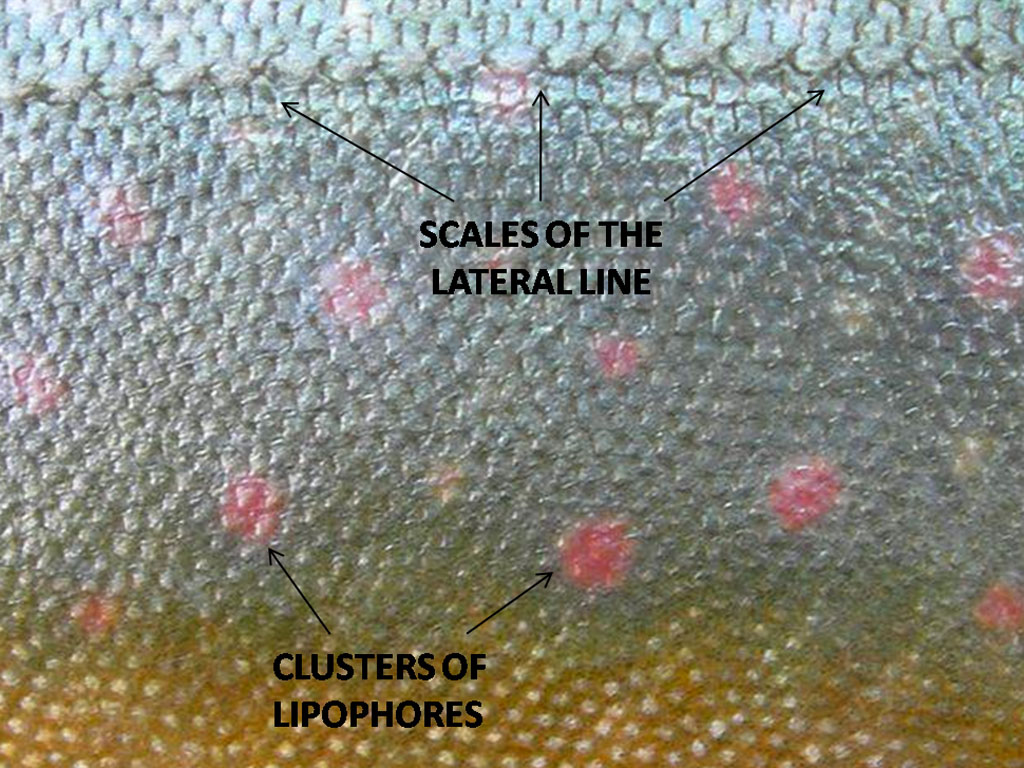 Chromatophores are irregularly shaped cells responsible for the changers in skin colour in response to environmental stimuli or internal physiological changes (Fig. 4, see also in Fig. 3). They are classified as melanophores (black-brown), lipophores i.e. xanthophores and erythrophores (yellow, orange-red) and guanophores. The later, also named iridophores, contain colourless crystals, mainly guanine, that produce iridescent reflections. Although colouring is mainly due to the presence of chromatophores, the full colour of a fish depends on the sum of colours of all its body tissues and fluids, and in larvae and transparent fish, on the content of the digestive tube only. Due its multiple functions any alteration of the skin may have serious effects on the fish health. The most common signs or changes are increased mucus, colour alterations, haemorrhage, ulcers, papillomas, granulomas, fin erosion and necrosis, as well as the presence of parasites. 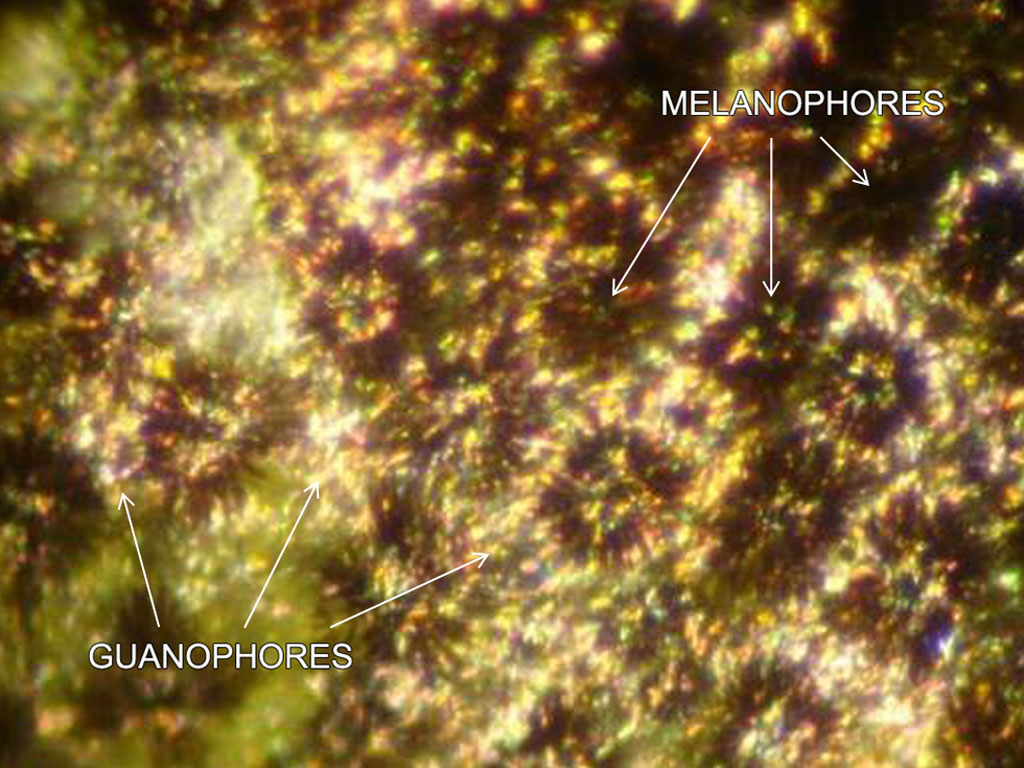