The function of the circulatory system is to distribute nutrients, oxygen and hormones to all parts of the body and remove the metabolic waste which are carried to the excretory organs. The circulatory system is made up of two anatomically defined, intercommunicated circuits the blood, arterial-venous or primary vascular system, through which blood flows, and the secondary vascular system or lymphatic system, through which lymph flows. 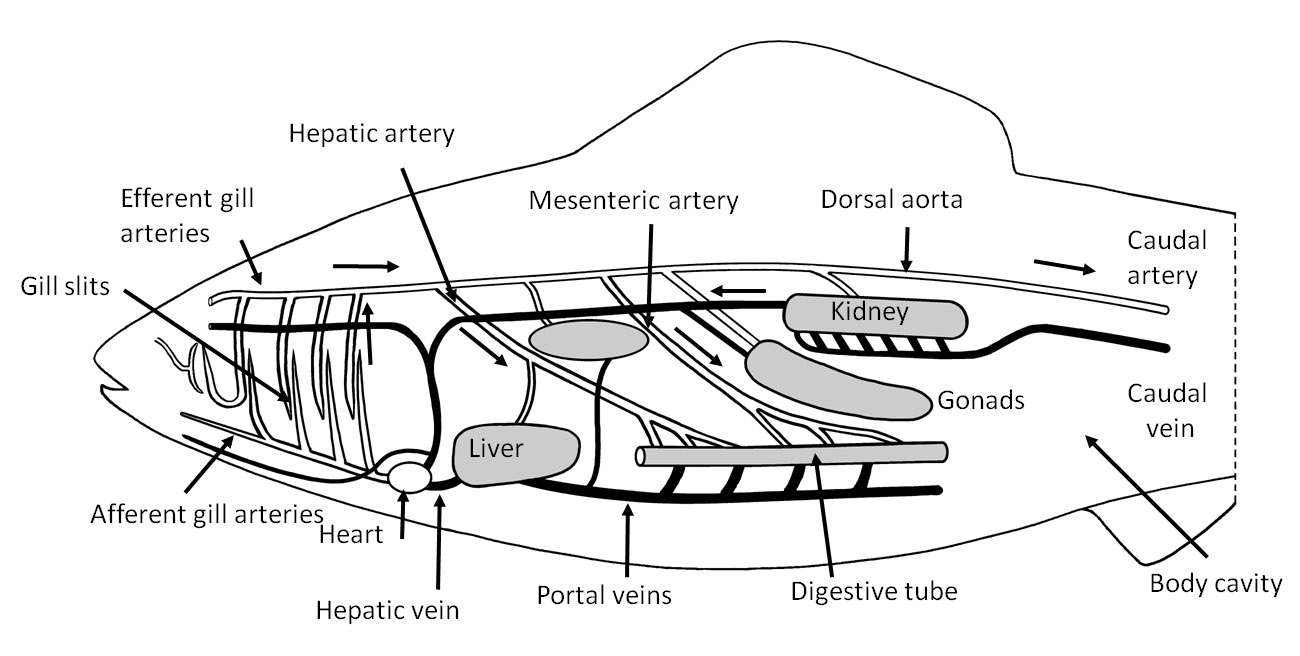 Blood circulation in teleosts is simple with as blood passing once through the heart during each circuit (Fig. 1). The blood pumped by the heart circulates clockwise (fish in left lateral view) and is distributed by vessels, i.e. arteries, veins and capillaries. Arteries diameter is almost uniform throughout and distribute blood to the entire body losing very little pressure. Veins collect blood from the capillaries and carry it to the heart, and act as a reservoir where blood can accumulate, forming a low-blood-pressure system. Capillaries form networks that irrigate organs and tissues, and their thin walls favour gaseous exchange. The walls of veins and arteries consist of three layers: the outer coat (tunica adventitia), middle coat (tunica media) and inner coat (tunica intima), with different degrees of development according to the type of vessel. The tunica intima consists of a simple epithelium of flat cells called endothelium and may have valves in some veins. The tunica media is the thickest layer, and consist of connective tissue and smooth muscle fibres arranged circularly; it may be thin or absent in some veins. The tunica adventitia consists of connective tissue that helps attach the vessels to the surrounding tissues. In contrast to other vessels, the capillaries are formed by a thin layer of endothelial cells. 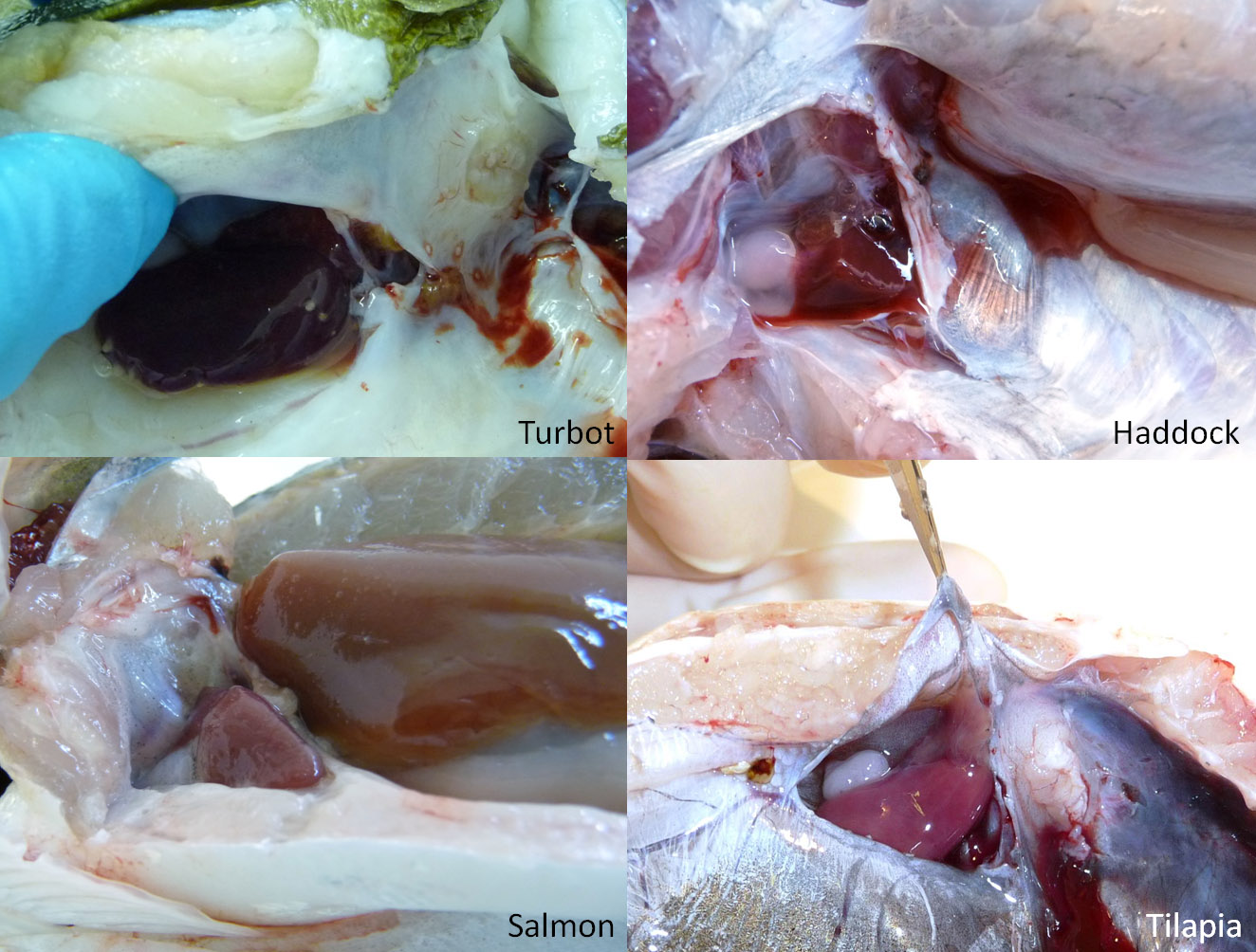 The heart is contained in the pericardial cavity (Fig. 2) and  consists of four linked compartments, namely (from the posterior to the anterior end) the sinus venosus, the atrium, the ventricle and the bulbus arteriosus (Fig. 3 ). An inflection during development places the sinus venosus and atrium in a dorsal position with relation to the ventricle and bulbus arteriosus. All the chambers are separated from each other by valves that prevent backflow: sino-atrial, atrio-ventricular and ventriculo-bulbar (Fig 3). Heart morphology show several differences among species but also, intraspecific modifications as results from adaptations to prolonged exposure to changes on relevant environmental parameters, as temperature, oxygen availability or to increased demands associated with activity and sexual maturation. There is evidence that rearing fish under intensive aquaculture conditions significantly alters some, but not all, aspects of cardiac anatomy and physiology. Different heart normal shapes can be seen in Fig. 2. 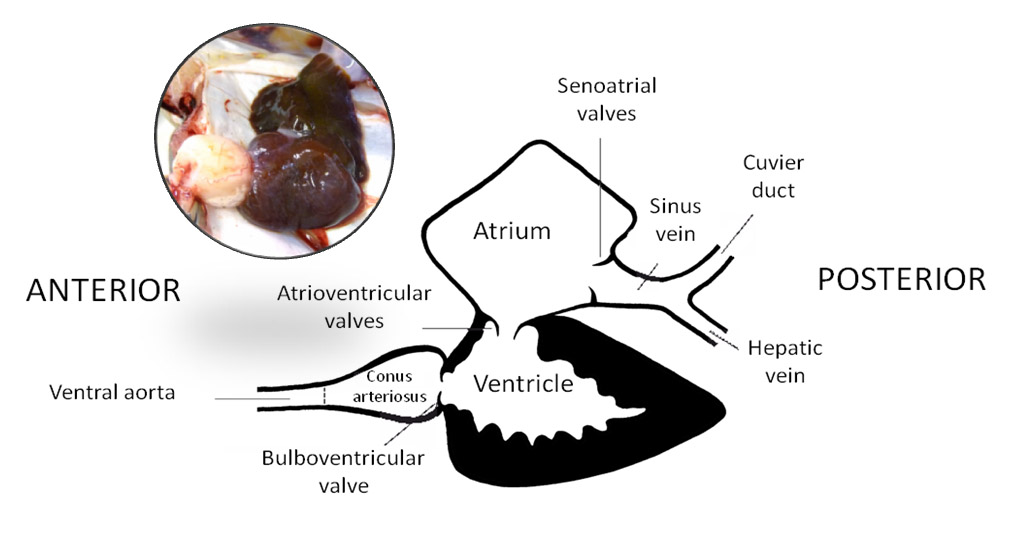 Histologically, the walls of the heart are made up of three layers: epicardium, myocardium and endocardium. The epicardium is the inner visceral layer of the pericardium, which covers all the heart chambers and consists of a fine layer of epithelium. Blood vessels and nerves are found in the epicardium, as well as adipose tissue. There are also some elements of haematopoietic tissue, and in some species, thyroid follicles. The myocardium, made of striated muscle, is arranged in two distinct layers: the inner spongy and the outer compact, separated by a thin layer of connective tissue. The compact myocardium benefits from oxygenated blood while the spongy myocardium depends of the oxygen from the carbo-oxygenated blood that circulates in the heart. The myocardium retains both hyperplasic and hypertrophic regenerative capacity throughout the life of the fish, thus differing from mammals in which only hypertrophic regenerative capacity last. Most of the tissue forming the atrium and ventricle is made of spongy myocardium, but in general, its thickness in the atrium is lesser than in the ventricle. The compact myocardium covers spongy myocardium and may consist of up to three layers. Its thickness may show variation depending on life stages, sex and physiological demands: also this increases with age, is thicker in males than in females, and in present in active species rather than those that are sedentary. The ventricle is the most conspicuous chamber of the heart (Fig. 2), and has the greatest morphological variation. In general, there is a strong relation between form and function, reflecting the different needs of the species. The ventricle in more active swimmers such as salmonids, is usually pyramid-shaped, but in other species, elongated, tubular or rounded ventricles are seen in perfectly normal hearts. The wall of the bulbus arteriosus consists of some smooth muscle and fibroelastic tissue. The  wall of the sinus venosus is essentially formed of connective tissue, but in some species an important part may be formed by cardiac cells (myocardium and even smooth muscle). Regardless of the configuration of the sinus venosus, it always harbors the dominant pacemaker in the sino-artrial valve. The endocardium lines all inner surfaces and is in direct contact with the blood. This endothelium is a thin layer of simple epithelium, which is highly phagocytic in some species, and also has de-toxifying capacity. These characteristics make the endocardium very important in monitoring and possibly even regulating infectious processes, although they also make it a highly vulnerable site. From the bulbus arteriosus blood flows forward through the ventral aorta, from which one afferent branchial artery stems to each gill arch (Respiratory system). The arteries branch into capillaries at each gill, and by means of efferent branchial arteries they converge into paired dorsal aortas which join in a single dorsal aorta extending posteriorly to the tip of the tail. Each pair dorsal aorta sends a branch that goes to the anterior end, to irrigate organs and muscle of the head. All these arteries distribute oxygen-rich blood to organs and muscles while the venous system returns carbon dioxide-rich blood to the heart. The caudal vein, coming from the tail, divides into two renal portal veins that branch into capillaries in the kidney (Excretory system). Blood leaves the kidney through the posterior cardinal veins, which open into the ducts of Cuvier that open into the sinus venosus of the heart. The hepatic portal system comprises veins that collect blood from the digestive tube, gas bladder and spleen, and converges into a hepatic portal vein that enters the liver, where it divides into capillaries in the sinusoids. The blood from the sinusoids is collected by two hepatic veins that leave the liver and open into the sinus venosus. From the anterior part of the body, blood flows through anterior cardinal veins and jugular veins to the ducts of Cuvier. The macroscopic alterations of the heart most include haemorrhage and exudate in the pericardial cavity, pericardial adhesions, oedema and parasitic cysts. Blood vessels may present hyperaemia, haemorrhage, petechiae, dilation, particularly from capillaries. The blood is a tissue made up of a solid cell phase, including different types of cellular components or blood cells, and a fluid or humoral phase, the plasma, which is a watery substance of complex composition. The blood cells represent 30-50% of total blood volume, and are divided in red blood cells or erythrocytes, white blood cells or leucocytes and thrombocytes. Fish red blood cells are oval shaped and nucleated. White blood cells are classified into granular leukocytes or granulocytes (basophils, eosinophils and neutrophils) and agranular leukocytes (lymphocytes, monocytes and macrophages). Lymphocytes are the most abundant leucocytes. In general terms, red blood cells carry respiratory gases, lymphocytes act in the immune response and thrombocytes take part in blood clotting, the latter being functional equivalent to platelets in mammals. Also in the bloodstream, immature forms of erythrocytes are often found, where they complete their maturation process. Macrophages are not usually found in the bloodstream, but rather in the tissues.

The secondary vascular system is highly developed in teleosts, especially in active species. The volume of this system can range from 10–50% to nearly twice the volume of the blood system. This system derives from and is parallel to, the primary or blood circulatory system. It has been suggested that it is analogous to or the progenitor of the lymphatic system in higher vertebrates, but differs in two important ways. The secondary vascular system in fish has its own network capillary bed in the gills, fins, mouth, peritoneum, and skin, and also directly connected with the primary circulatory system. Its function is not fully known, although the fact that it is closely associated to internal and external surfaces suggests that it is homeostatic and osmoregulatory. Its main function is probably to maintain the integrity of the sub-epithelial interstitium and to serve as the trans-epithelial water and ion exchanger. 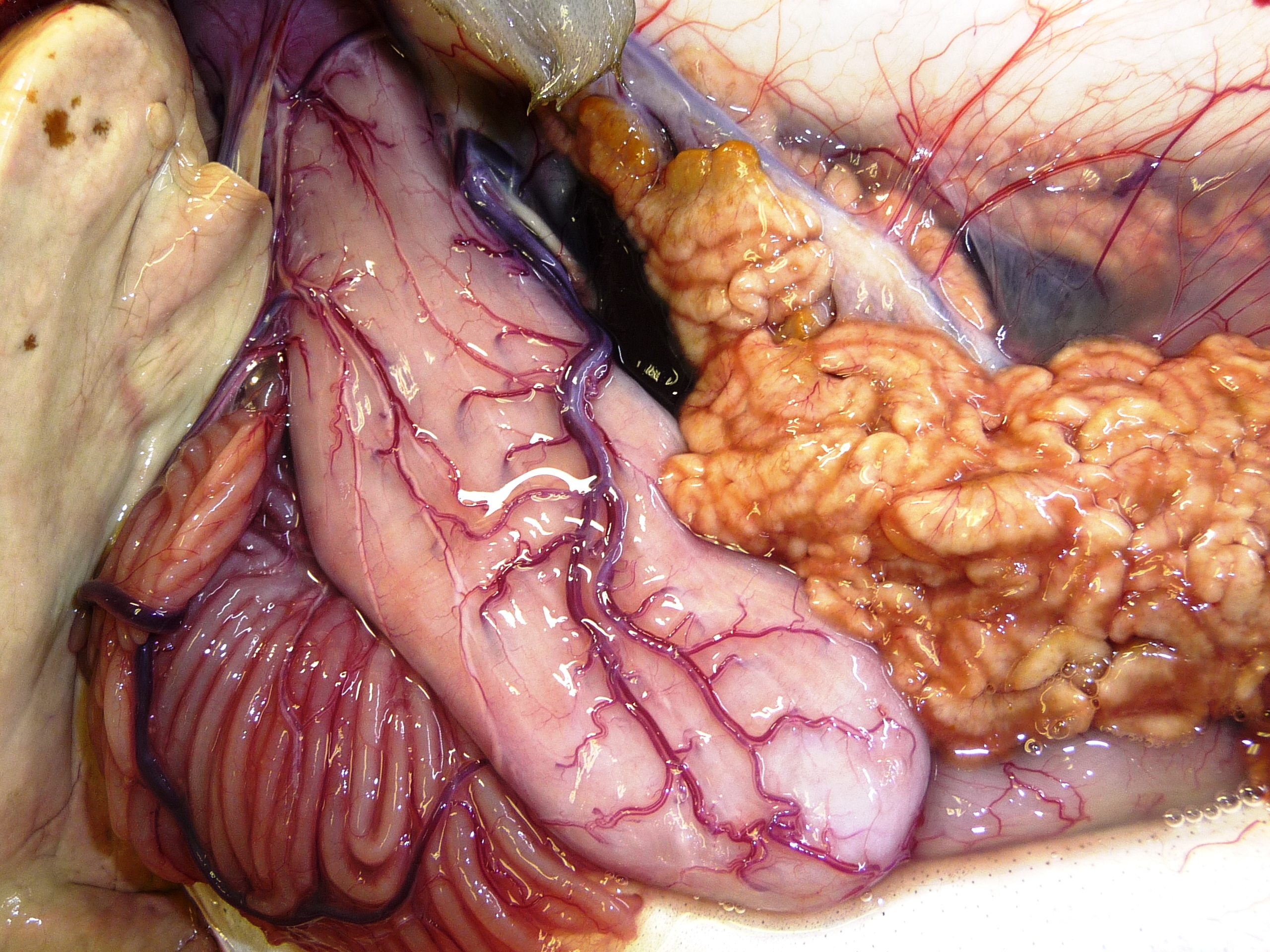 The secondary vascular system is formed by vessels (arteries, veins and a network of capillaries), heart and lymphatic sinuses or sacs, through which lymph flows. Teleosts do not have lymph nodes. The system originates from vessels with small diameters that generate inter-arterial anastomoses that stem from certain arteries. Further anastomoses arise from these, forming vessels of larger diameter that run parallel to the main vessels of the primary circulatory system. These vessels join up to form vessels of greater diameter that finally open into the blood system (Fig. 4) A caudal heart, located in the peduncle at the base of the caudal fin, acts as a pump for the secondary vascular system. The sinuses may be paired or unpaired and are located from head to tail. The structure of all the vessels is similar to the structure of the vessels of the primary vascular system, suggesting that it is regulated in a similar way. There is a network of capillaries in the gills, skin, peritoneum (Fig. 5), fins and oral mucosa, although it is not uniform among fish species. This network is believed to provide nutrients to the skin, particularly the mucous cells, and in addition, due to its position near the surface, it probably plays a part in infections by distributing white blood cells. In gills, it probably has functions related to the chloride cells. Due to its close contact with the intestine, it acts in transportation of intestinal lipoproteins, which are finally released into the blood system. 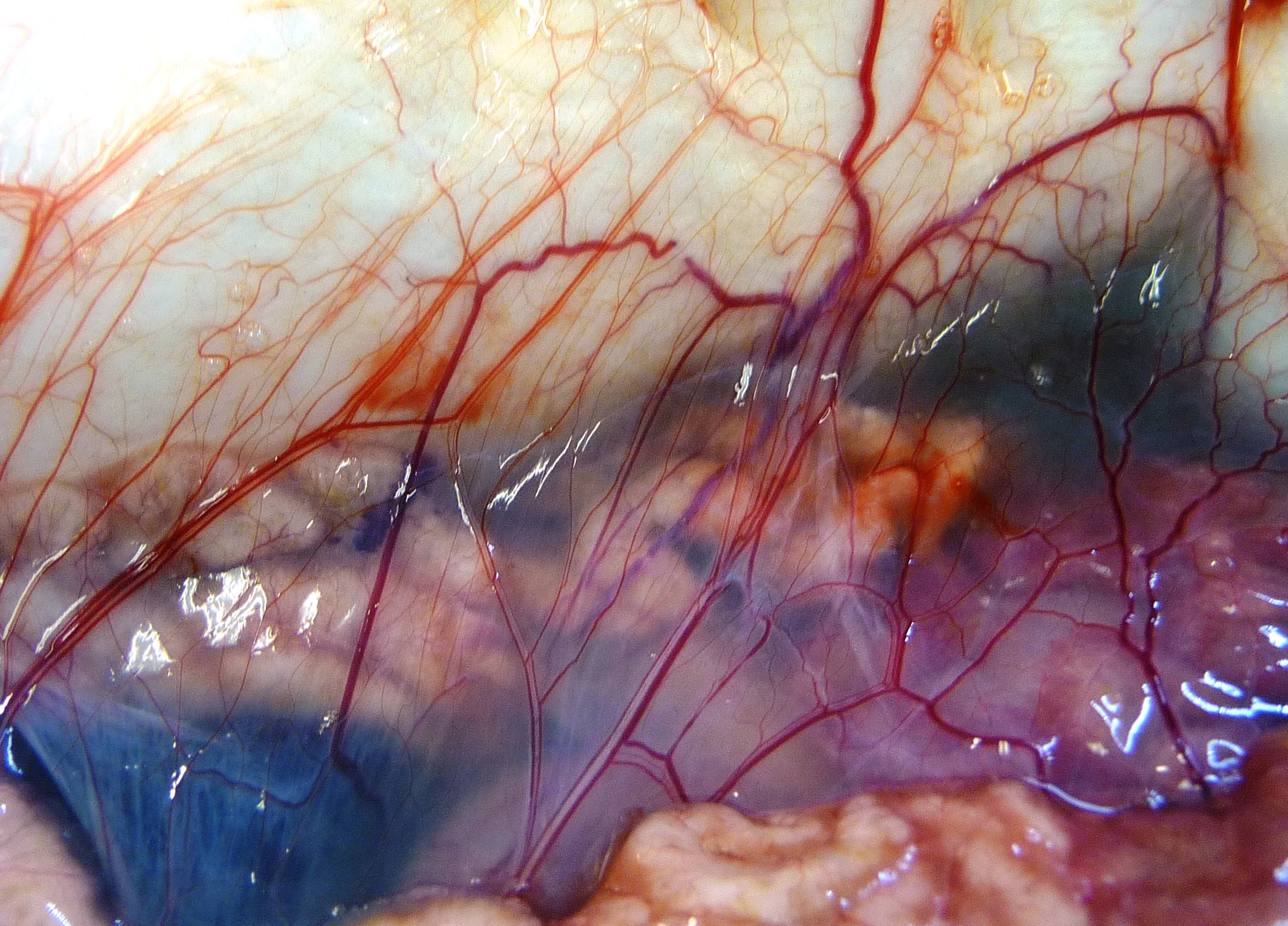 The composition of lymph is similar to the composition of blood plasma, without red blood cells and contains only a few white blood cells, which may contribute to the immune function. Lymph is formed when the blood in the primary system passes into the secondary system by perfusion, due to the presence of microvilli at the base of the inter-arterial connections that prevent the passage of most of the blood cells in the blood. Pressure and circulation speed in the secondary system are low and its volume is at least 1.5 times greater than the volume of blood. The circulation of lymph is affected by blood vessel tone, to which it is closely related, and enhanced by movements of the body.